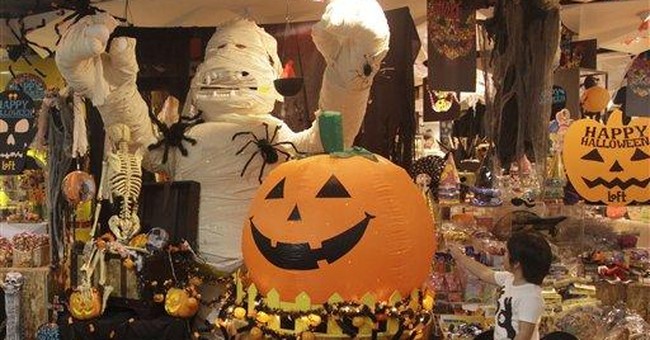 The Anti-Defamation League (ADL) is an organization known for its mission to stop the defamation of Jewish people and all other groups. That now extends to causing a stir over Halloween costumes, with a resource article titled, "Halloween: When the Goblins, Ghosts and Stereotypes Come Out," no less. It's part of their Anti-Bias Education section.

Halloween is a week away and you and your family might be brainstorming costume ideas. Check out our resource for reminders about how and why to avoid cultural appropriation, cultural stereotypes, and costumes that perpetuate gender norms. https://t.co/BWW8FFTpkG

The replies and retweets are absolutely brutal, with virtually all of them calling ADL out for this. Many use GIFS with expletives. There are also replies from those who take issue with what ADL has become.

I think of the thousands my family gave to the ADL over the years. This is what it has come too? Might as well give to a Woke Good Housekeeping.

Me: "I wish I could summarize the risks and inherent dumbness of aimless organizational mission drift with only one Tweet..."@ADL: "Here, hold my beer"

It's like you and the ACLU are in some competition for trading once useful raison d'etres to become grey blobs of wokeness.

Actual violence against Orthodox Jews in New York, and you puke this woke drivel. Just change your name and be done with it. Anti-Liberty League.

Wouldn't it be easier to hang an "No Longer in Business" sign on your account? Meanwhile others are addressing pro-Israel students harassed on their campus, random attacks on Chasidim in NY and security threats hanging over all our institutions.

I'm old enough to remember when the ADL cared about protecting the Jewish community, including from the yearly antisemitic attacks on Halloween. Now they are woke leftists who care about policing costumes. https://t.co/W71nU0zPo9

Readers at least know from the start what a "killjoy" this resource is going to be. "When autumn blows in, Halloween fun is close behind. And yet sometimes, it is the opposite of fun," it begins.

There are the expected directives of "Discuss stereotypes with costume choices" and "Take the opportunity to respect different beliefs" as well as "Include all young people." But remember, it's not just "cultural appropriation" that's the issue anymore.

The longest and most absurd section has to do with the directive to "Discuss gendered messages in costumes."  Emphasis is mine:

Dress-up be an opportunity for children to “try-on” different personas and expand their horizons. Unfortunately, much of the marketing and messaging around Halloween costume options ends up narrowing these horizons and reinforces restrictive social norms around gender and sexual orientation. “Girl costumes” predominantly focus on dresses and being pretty, such as princesses or fairies. Even superhero costumes “for girls” include skirts, instead of the more practical pants for crime-fighting. Costumes marketed to older girls emphasize attractiveness and sexual appeal.

While costumes targeted to boys place heavy emphasis on superheroes and action figures, choices like these convey the message that boys should be scary and gruesome. Many children are attracted to traditional gendered costumes, think girls who love princesses or boys who are obsessed with action heroes. When that is the case, it is best not to reinforce that these are the only appropriate options available. Engage in conversations with young people about gender stereotypes and discuss messages that companies send through marketing and advertising.

Many Halloween costumes perpetuate gender stereotypes and exclude those who don’t conform to traditional gender norms, especially those who are transgender, non-binary or gender non-conforming. Be mindful that you may have students who feel excluded and marginalized by the overly gendered way Halloween costumes are marketed.

Encourage self-expression, while making sure that children who venture outside of gender norms for Halloween are accepted, respected and not teased. Before a Halloween event, you might say something like, “It’s really fun to dress up and pretend. At our school, there aren’t boy’s and girl’s costumes.”

If there's a section that highlights how uptight and insane this "resource" is, it's this one.