Perry: To All Struggling Americans, "I Am Running To Be Your President" 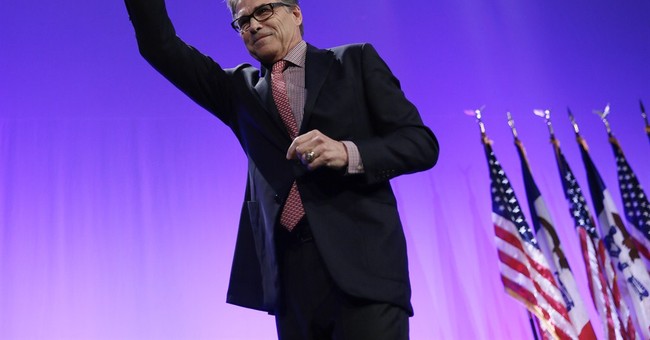 Launching his candidacy from an airport in the small town of Addison, Texas, Perry emphasized his humble and rural roots, military service, impressive economic record, and years of experience as the chief executive of the Lone Star State.

But perhaps what struck me most about his speech was just how much he tailored his message to the struggles of ordinary people. It wasn’t just a speech that attacked the current occupant of the White House—although there was certainly a lot of that. Instead, it was a first step towards widening his appeal beyond traditional Republican constituencies.

Three excerpts from his speech are worth examining.

(1) His pitch to young Americans:

Debt is not just a fiscal nightmare, it is a moral failure. Let me speak to the millennial generation: massive debt, passed on from our generation to yours, is a breaking of the social compact. You deserve better. I am going to offer a responsible plan to fix the entitlement system, and to stop this theft from your generation.

To those forgotten Americans drowning in personal debt, working harder for wages that don’t keep up with the rising cost of living, I come here today to say your voice is heard. I know you face rising health care costs, rising child care costs, skyrocketing tuition costs, and mounting student loan debt. I hear you, and I am going to do something about it.

(3) His pitch to children growing up in poverty—and to the unemployed:

To the one in five children in families on food stamps, to the one in seven Americans living in poverty, to the one in ten workers who are unemployed, under-employed or given up hope of finding a job: I hear you, you are not forgotten. I am running to be your president.

This sounds like something a Democrat would say. But his message is effective precisely because he has the credibility and record to say such things. And while he may be struggling mightily in public opinion polling, if he can avoid more embarrassing gaffes—and make it onto the debate stage—he could surprise a lot of people who presumptuously dismissed him four years ago.

I’ll leave you with this: The very end of his speech, which drew thunderous applause from his closest friends and biggest supporters: