This Day in American History... 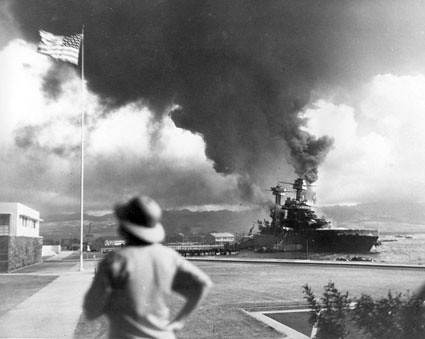 More than 2,400 men and women lost their lives during the attack Pearl Harbor, Hawaii, by the Empire of Japan 68 years ago today.  This surprise attack brought the United States into the growing conflict of World War II through a Congressional Declaration of War:
It was a most dramatic spectacle there in the chamber of the House of Representatives. On most of the President's personal appearances before Congress, we found applause coming largely from one side—the Democratic side. But this day was different. The applause, the spirit of cooperation, came equally from both sides. ... The new feeling of unity which suddenly welled up in the chamber on December 8, the common purpose behind the leadership of the President, the joint determination to see things through, were typical of what was taking place throughout the country.
--Judge Samuel Irving Rosenman, advisor to President Roosevelt
The Thread That Shreds CNN's Fake News idiocy...And This Is Just the Tip of the Iceberg
Matt Vespa
Want to Guess How Long It Took Tucker Carlson to Shred Democrats' Illegal Alien Figure?
Matt Vespa
Is This Why Jim Acosta Went to CPAC?
Matt Vespa
Here's What Ted Cruz Is Doing to Keep Democrats from Packing the Supreme Court
Bronson Stocking
A Top Biden Adviser Quietly Said What Could Never Be Voiced in Public About COVID and the 2020 Election
Matt Vespa