With the NY Grand Jury Disbanding, Liberal America Needs to Accept the Obvious Here Regarding Trump 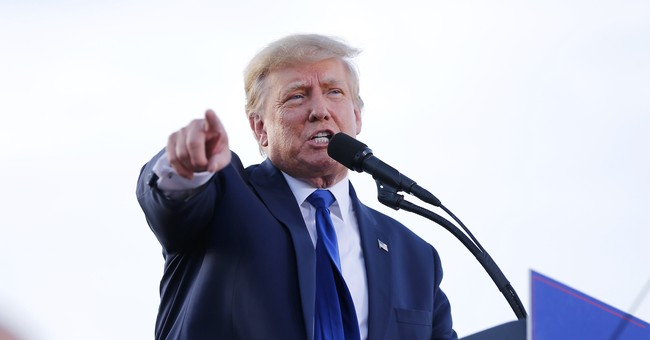 Sorry, liberals, you lose…again. This ongoing and rather humiliating legal crusade to indict Donald Trump on…anything has really devolved into an obsession that would have procured a restraining order by now. It's getting creepy.

You people might think that this is some patriotic duty. Everyone else views it as weird and fruitless. We have run the gauntlet on this one, folks. Trump has been a tax cheat, a Kremlin agent, an extortionist of Ukraine, and a violent insurrectionist. All are false. He was impeached twice – and beat the Democrats at every turn. How many "walls are closing in" stories have there been about Donald Trump? Too many to count, and all fake news. They're not going to get him on anything…because there is nothing. Take the "L" and move on because this is just an embarrassing spectacle.

We wrote about this in March, that nothing was going to happen to Trump regarding these New York investigations. But now, it's official. The New York grand jury is dissolving with no charges filed against Trump. Sure, the local Manhattan district attorney says he'll keep digging, but the odds of charges being filed are not good. And by that, I mean—it's never ever going to happen (via The NYT):

At least three of the witnesses once central to the case have either not heard from the district attorney’s office in months, or have not been asked to testify, according to people with knowledge of the matter.

In recent weeks, a prosecutor at the Manhattan district attorney’s office who played a key role in the investigation has stopped focusing on a potential case against Mr. Trump, other people with knowledge of the inquiry said — a move that followed the resignation earlier this year of the two senior prosecutors leading the investigation.

And the remaining prosecutors working on the Trump investigation have abandoned the “war room” they used to prepare for their grand jury presentation early this year, the people said, leaving behind an expansive office suite and conference room on the 15th floor of the district attorney’s office in Lower Manhattan.

The grand jury’s expiration at the end of the month does not preclude prosecutors from impaneling another jury, but the developments underscore the reduced possibility that Mr. Trump will face charges under Mr. Bragg, who along with several other prosecutors had concerns about proving the case. Some people close to the inquiry believe that it will not result in an indictment of the former president unless a witness cooperates unexpectedly — a long shot in an investigation that has been running for more than three years.

In recent weeks, Mr. Bragg’s prosecutors have issued a few additional subpoenas that indicate they are continuing to investigate but have not found a new path to charging Mr. Trump. The previously unreported subpoenas, people with knowledge of the matter said, appear to focus on the same topic that has long been the subject of the investigation: whether Mr. Trump falsely inflated the value of his assets in annual financial statements.

But impaneling a new grand jury could create challenges for any potential case. Mr. Trump’s lawyers could argue — and a judge might agree — that prosecutors were inappropriately hunting for a more favorable group of jurors.

It would also take time to prepare a new presentation of evidence and months to lay out a case to jurors.

Mr. Bragg’s office does not have unlimited time to charge Mr. Trump. Witnesses could forget key information. Prosecutors would also face a deadline to file the charges within five years of any crimes being committed, though there are some exceptions that extend the deadline. And were Mr. Trump to announce another presidential run, Mr. Bragg would be likely to face political pressure not to indict a leading contender for the White House.

This game is over. Trump won. The left lost. If these guys haven't found anything to pin on the former president, then it doesn't exist. This witch hunt must end, but it will be never-ending.

Liberals still can't get over the fact that Hillary lost in 2016, and news about investigations into Trump keeps their egos inflated and protected from damage. The clown show continues, but even the most ardent leftists and anti-Trumpers have to realize that this is just a fool's errand by now, right? Maybe they're admitting this fact in private?