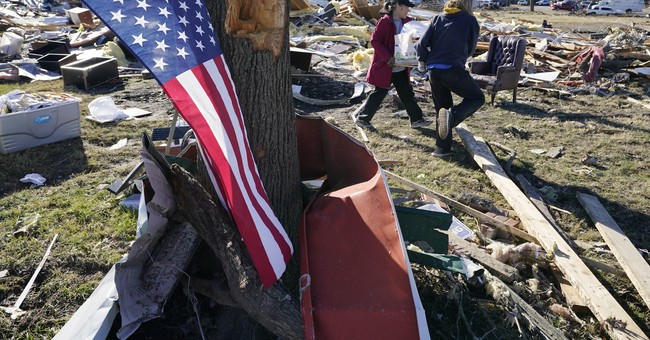 A string of strong and violent storms ripped through the southern United States. The death toll varies but it could be as high as 100. Whole communities have been wiped out. It was a series of four tornados. One touched down in Arkansas and remained on the ground for 227 straight miles. The devastation is a total. Here’s the Associated Press’ coverage of a local factory in Kentucky working to get Christmas orders prepared as duck and cover warnings were heard throughout the plant (via AP):

Autumn Kirks pulled down her safety goggles and took shelter, tossing aside wax and fragrance buckets to make room. She glanced away from her boyfriend, Lannis Ward, and when she looked back, he was gone.

Gov. Andy Beshear initially said Saturday that only 40 of the 110 people working in the factory at the time were rescued, and that “it’ll be a miracle if anybody else is found alive in it.” But on Sunday, the candle company said that while eight were confirmed dead and eight remained missing, more than 90 others had been located.

Dozens of people in several Kentucky counties are still believed to have died in the storms, but Beshear, after saying Sunday morning the state’s toll could exceed 100, said that afternoon it might be as low as 50.

“We are praying that maybe original estimates of those we have lost were wrong. If so, it’s going to be pretty wonderful,” the governor said.

Kentucky was the worst-hit state by far in an unusual mid-December swarm of twisters across the Midwest and the South that leveled entire communities and left at least 14 people dead in four other states.

Deadliest natural disaster ever in Kentucky (potentially) and while it's obviously getting media coverage, nothing like the magnitude of coverage if it were, say, NY/CA or even TX/FL. Hard to miss this ingrained geographic bias against states that elites generally do not frequent

In her defense, the tornado did cross state lines. https://t.co/wK42qGWJZn

We should do all we can to help our Kentucky neighbors. God be with them — they are hurting. But do not for one second forget that @RandPaul has voted against helping most Americans most times they’re in need. https://t.co/JkZQOZ4HuG

We know @RandPaul is a heartless hypocrite. The people in Kentucky deserve the relief regardless of their buffoonish leadership, but if the Dems don’t use this against him and his party in the future, it is a missed opportunity. https://t.co/G61GrsNfFq

It’s a tragedy. For normal people, thoughts and prayers rang out. For liberals, they chortled and loved that these people were dead. Why? Well, it’s Kentucky. It’s Republican, though they have a Democratic governor in Andy Beshear. It’s a place where these people don’t go because liberals only care about urban-based settings, which isn’t America—at all. There are people who live in places that aren’t dominated by these snobby, condescending cretins. These are the folks who want to just want to put in an honest day’s work and raise families. They don’t have the privileges of being miserable about things that aren’t real as they do in liberal America. They don’t have the time. They need to work on things that matter, not about which pronouns are acceptable and whether a dude swimmer can compete as a woman. It’s not Mars. The irony is that liberals are supposed to be people who want to experience new stimuli—and yet they hate rural Americans with a passion. They hate anyone who isn’t like them, and the great con is that they’ve passed on as being folks who want to build an America for everyone. That’s the real big lie.

This isn’t the first time. When Hurricane Harvey ravaged Texas, liberals were quite open about mocking disaster victims and relief efforts. These people hate us.