Police: Parents of Michigan High School Shooter Are on the Run 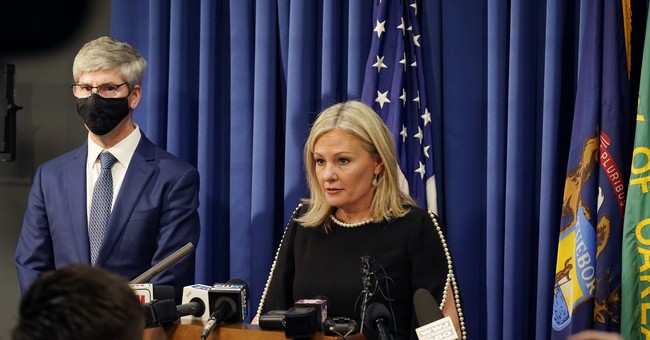 The tragic Michigan high school shooting is not over. Ethan Crumbley, 15, shot and killed four students at Oxford High School this week. He’s facing murder and terrorism charges. He’s being charged as an adult. And his parents were just slapped with four counts of involuntary manslaughter. Jennifer and James Crumbley reportedly bought the firearm used in the shooting despite their son’s alarming behavior. They did not safeguard it. Now, the parents are on the run. They were supposed to turn themselves over to authorities at 2 PM today. That didn’t happen. Now, local police are in pursuit. The FBI and the US Marshals service have also been looped into the situation.

Jennifer and James Crumbley are charged with four counts of involuntary manslaughter.

Sheriff says an attorney for the couple contacted Detectives this morning and said she’d make arrangements for their arrests if charges were issued. But when Detectives went to arrest the couple — attorney said she couldn’t reach them by phone or text despite repeated attempts.

Says they have Fugitive Apprehension Team, the FBI and the US Marshals Service looking for them — “The action of fleeing and ignoring their attorney certainly adds weight to the charges. They cannot run from their part in this tragedy.”

JUST IN to @ABC: Ethan Crumbley's parents were scheduled to surrender at 2pm. They have not surrendered and now the sheriff’s fugitive task force is looking for them. Unclear whether there's been a mistake or if they’re trying to flee.

#BREAKING: Oakland County, Michigan Sheriff announces on CNN that they're currently UNABLE to locate the whereabouts of the Crumbley's, whose son murdered four and injured seven. pic.twitter.com/XwALJgNZVj

UPDATE: Their lawyers have said that the parents left the area for their safety and will be returning. They are not on the run (via Detroit News):

The Oakland County Fugitive Apprehension Team was searching Friday for the parents of Ethan Crumbley, the 15-year-old Oxford High sophomore charged with first-degree murder of four students and other criminal charges, after county Undersheriff Mike McCabe said the couple had stopped responding to their attorney.

"On Thursday night, we contacted the Oakland County prosecutor to discuss this matter and to advise her that James and Jennifer Crumbley would be turning themselves in to be arraigned," lawyers Shannon Smith and Mariell Lehman told The Detroit News. "Instead of communicating with us, the prosecutor held a press conference to announce charges."

"The Crumbleys left town on the night of the tragic shooting for their own safety. They are returning to the area to be arraigned. They are not fleeing from law enforcement despite recent comments in media reports."

James and Jennifer Crumbley of Oxford were named in criminal warrants Friday, with each being charged with four counts of involuntary manslaughter in the deaths of four Oxford High School students who were allegedly slain by their son. They also were named in a noon press conference held by Oakland County Prosecutor Karen McDonald to announce the charges.

UPDATE II: US Marshals have joined the manhunt. If the Crumbleys are returning, everyone and their mother in law enforcement is going to have questions and much more.

US Marshals are now looking for Ethan Crumbley's parents -- James and Jennifer. The fugitive apprehension team out of Detroit is on the case.

The US Marshals have adopted the case of the search for James and Jennifer Crumbley, the parents of the accused Oxford HS (Mich.) shooter. The USMS Detroit Fugitive Apprehension team is working in conjunction with the Oakland County Sheriff’s Office on the search.

UPDATE III: Yeah, I don't think they'll be at arraignment.

The Michigan school shooting suspect's parents withdrew $4,000 from an ATM today, an official says, and their cell phones are turned offhttps://t.co/3zOMp0cU1J