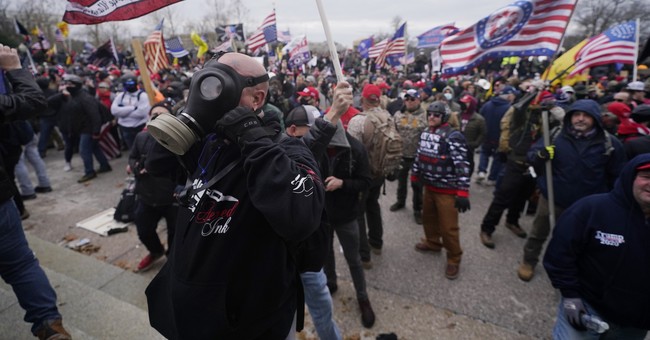 I may disagree with him more post-Trump, but George Will used to be a solid player when it comes to mocking the excesses of liberalism. During the Obama years, you could always count on him every Sunday to rip apart the administration for its stupidity or explicit naïveté, especially when it came to foreign policy. With Trump, Will wants nothing to do with him, even suggesting that the GOP should lose elections to revert to its principled core. Yeah, I’m not on board with that at all; burning the city to save the city is always a dumb move. And Trumpism and modern Reagan conservatism have a lot of overlap. It all boils down to people not liking Trump personally because he screwed up a lot of their plans. That's not our problem.

Now, Will’s latest take on the January 6 riot on Capitol Hill was something you might have heard on MSNBC or CNN. In fact, a lot of lefties have already made this point. He mentioned it on ABC’s "This Week" (via Newsbusters):

Conservative Washington Post columnist George Will made his return to ABC’s This Week on Sunday and it turned out to be a mixed bag. Aside from accurately noting that Israel had no one rational to work with on the other side since every leader in Gaza was a genocidal maniac, Will suggested that the January 6 Capitol Riot was an equal “shock to the system” as 9/11, a coordinated terror attack that killed 3,000 people.

Host George Stephanopoulos kicked off the panel discussion with Will and by focusing on the Republican opposition to a commission to investigate the riot. “We just heard Speaker Pelosi and Leader McConnell right there, we heard Susan Collins say she's still optimistic for something going forward on this January 6 commission. It's kind of hard to believe it's even controversial,” Stephanopoulos scoffed.

“Well, it's controversial for one reason,” Will declared. According to him, it’s because GOP lawmakers despised their voters. “Every elected official is frightened of his voters, therefore doesn't respect his voters, and doesn't like his voters and is afraid that a vote for this will be seen as an insult to the 45th president.”

What happened that day was just as bad as the 9/11 attacks? Will said that day should be burned into our memories. It was a shock to the system. For some, yes. I’m not saying what happened that day was good, but after decades of Congress not doing its job and an election that was in doubt on the minds of tens of millions of Americans over some funny business at the ballot boxes—yeah—I could see why things got totally out of control. At the same time, it was not an armed insurrection. They did not murder Capitol Police officers, which was a liberal media narrative that recently collapsed. Remember, they’re wrong about everything.

Three thousand-plus people didn’t die, Mr. Will. This wasn't a scene of mass slaughter. It wasn’t a constitutional crisis. That's one area that Will is right about, the overuse of that term. We've only had one such crisis in our history thus far—the American Civil War.

Will was correct that a two-state solution for the Israeli-Palestinian conflict, which was discussed later, was probably not a realistic goal and probably has been for some time since the other party has a genocidal mindset regarding Israel and the Jewish people. So, yeah—Will's very wrong about the Capitol Hill riot that the liberal establishment thinks is akin to Pearl Harbor (it's not), but he's very right about the current situation in Gaza.