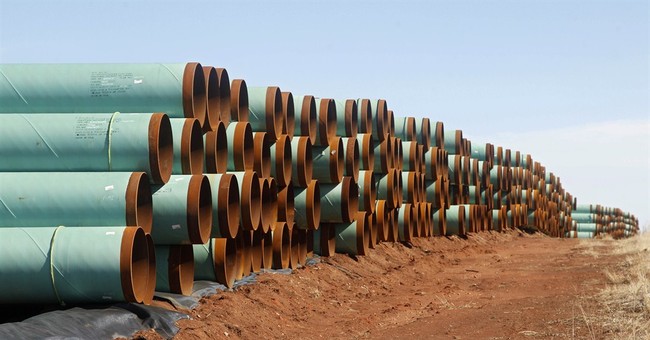 The Keystone Pipeline is once again facing legal hurdles. A federal judge in Florida told a developer working on the project that they couldn’t even ship pipe to the construction site. The judge is an Obama-appointee who recently blocked a permit for the long-awaited project in November (via The Hill):

A federal judge said the developer behind the proposed Keystone XL oil pipeline can’t even haul pipe in preparation for the project.

Judge Brian Morris of the federal District Court for the District of Montana rejected TransCanada Corp.’s request Friday to complete various “preconstruction” activities in preparation for building the Canada-to-Texas pipeline, saying they could lead to the irreparable harm he is trying to prevent.

“The irreparable injury threatened by the … preconstruction activities go beyond merely the ground-disturbing injuries alleged by plaintiffs,” Morris, nominated to the bench by former President Obama, wrote in his order, saying the activities “could skew the [State] Department’s future analysis and decision-making regarding the project."

TransCanada had asked Morris to refine his ruling to allow certain activities, like hauling pipes closer to the construction areas, mowing rights-of-way and preparing worker camps.

President Trump said the construction of this pipeline, which was hamstrung by the Obama administration, would move forward under his presidency. In March of 2017, the Trump White House issued the green lightafter issuing an executive order in January of that year reversing the Obama administration’s position. The judge ruled in his decision that the Trump administration did not give an adequate reason for issuing their permit from 2017. This is just another issue, where the courts have pushed back on Trump. No doubt about a fight erupting over this—as it should; this is a trash ruling. Build that pipeline!