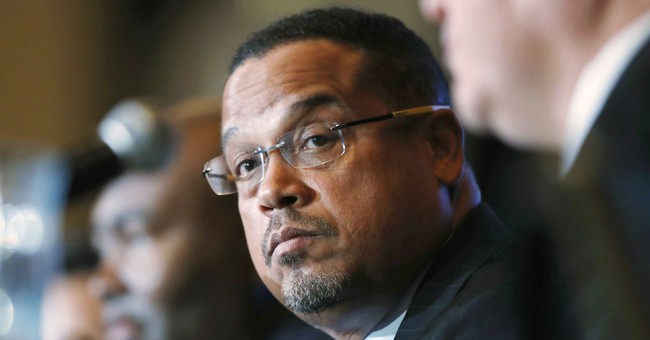 Democrats seem to have the political winds to their backs, though their advantage in the generic ballot for the 2018 midterms has been chipped away thanks to the consistent good news coming from the Trump tax bill. Over three million workers have received bonuses. Over 250 companies have doled them out, along with increasing philanthropic giving and U.S. investments. It’s created a better job-creating climate.

Yet, the Democratic National Committee is in trouble. They’re millions of dollars in debt. They recently took out a $2 million loan to keep the lights on.

Still, there are some who are yearning to bring back the revolution to help Democrats retake Congress. One of those people is Virgie Rollins, the DNC Black Caucus chair, who identified herself as a former Black Panther member. Rollins made her feeling known at a town hall event in Detroit, Michigan last Saturday; Deputy DNC Chair Rep. Keith Ellison (D-MN) attended the event (via Washington Examiner):

At the end of Rollins' statement, which was secretly taped and posted online by the GOP War Room, she asks blacks to vote for Democrats in the 2018 midterms and help take Congress back from the Republican Party.

"We got to turn back to the revolution!" Rollins yelled.

Not the most shocking news since Ellison has palled around with worse characters, like Louis Farrakhan, which led longtime Democrat and lawyer Alan Dershowitz to declare that he would leave the party should Ellison become DNC chair. He didn’t; Tom Perez took the helm. Ellison has also generated controversy of how own, saying that not giving sanctuary to illegal aliens is akin to not helping Jews evade the Nazis. He’s also an apparent supporter of Antifa. So, par for the course here for Ellison and the Democrats.