As Women Take To The Streets To Protest Trump, Hillary Clinton Tweets Words Of Support 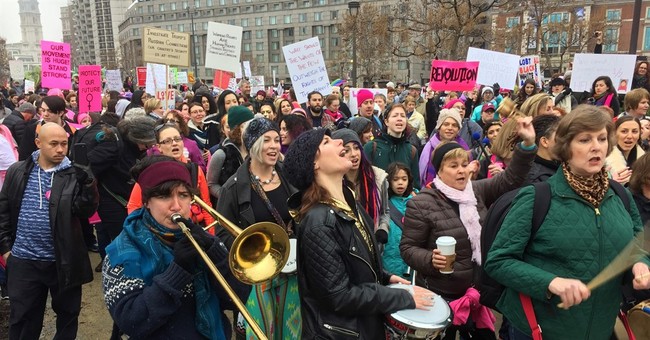 Thanks for standing, speaking & marching for our values @womensmarch. Important as ever. I truly believe we're always Stronger Together.

The day has arrived. As President Donald J. Trump attends a National Prayer Service at the National Cathedral, millions of women around the world plan to march against him. Two hundred thousand are expected to demonstrate in Washington D.C. alone, with another three million joining worldwide from six hundred other cities, according to NBC News. While some protesters say it’s not an anti-Trump event, the cast of characters showing up suggests otherwise:

It's finally here! Check out our March Map and remember to print it out and save it to your phone. #WomensMarch pic.twitter.com/LwMNx674ss

Organizers say the Women's March on Washington was intentionally scheduled for one day after the presidential inauguration with the aim of sending a message to the newly minted administration: Women's rights are human rights.

As the Washington march was expected to attract as many as 200,000 people, cities across the country and the world, from San Diego to Sydney, Australia, saw similar robust gatherings — a point made by the event's honorary co-chair and feminist icon Gloria Steinem.

"I was just talking to people from our many sister marches, including the one in Berlin, and they asked me to send a special message: 'We in Berlin know that walls don't work,'" Steinem said to applause, referencing Trump's pledge to build a wall along the U.S. border with Mexico.

Around the world as well, many other gatherings had already hit the streets.

"We want to send the sign to the women in the U.S. that we are all in this together," Stef Vogt said as she marched in Sydney, Australia — one of the first cities to see protests.

In the Thai capital of Bangkok, women wore pink and carried banners saying "Bridges not walls."

On my way over to the Women's March on Washington! I'll be speaking in the first hour. We are the MAJORITY.

"I'm not as nasty as a man who looks like he bathes in Cheeto dust." -- @AshleyJudd #WomensMarch

Getting ready to leave for @womensmarch in support of @Everytown @MomsDemand @1Pulse4America #whyIMarch pic.twitter.com/13MytIwK5B

Yeah, that’s anti-Trump, folks. Michael Moore said they were here to stop Trump’s “carnage.” Ashley Judd said that Trump bathed in “Cheeto dust.” On the other hand, some are marching for gun control, so it’s the usual motley crew of progressives descending into Washington to show the rest of us how they’re not dealing with Hillary Clinton’s loss all that well. Here’s the mission statement for the march:

The rhetoric of the past election cycle has insulted, demonized, and threatened many of us - immigrants of all statuses, Muslims and those of diverse religious faiths, people who identify as LGBTQIA, Native people, Black and Brown people, people with disabilities, survivors of sexual assault - and our communities are hurting and scared. We are confronted with the question of how to move forward in the face of national and international concern and fear.

In the spirit of democracy and honoring the champions of human rights, dignity, and justice who have come before us, we join in diversity to show our presence in numbers too great to ignore. The Women’s March on Washington will send a bold message to our new government on their first day in office, and to the world that women's rights are human rights. We stand together, recognizing that defending the most marginalized among us is defending all of us.

Scenes from Capitol Hill! This place is crowded!!! Thousands already in the area getting ready for the #WomensMarch in DC. Love it. pic.twitter.com/Y6FHmjL7rw

Lisa Belkin of Yahoo! News reported on a group of twelve women from Louisville, Kentucky as they traveled to D.C. for the march:

Packed shoulder to shoulder Never been in a crowd like this #WomensMarch we can't get out of our satellite truck. @NBCNews #WomensMarch pic.twitter.com/VEMeB3wtD3

The plan was to drive on Friday in order to ignore the inauguration. “Counterprogramming,” joked Bridget Pitcock, chief of staff at a managed care company in Louisville. This trip was her idea. Reading about early plans for the march soon after Election Day, she called her wife of three years, Meg Hancock, and announced they would need to rent a van and fill it with others who were “outraged and in despair.”

Now they had, and once the van was filled to bursting with people, luggage and hand-drawn signs, Hancock, an assistant professor of sports administration at the University of Louisville, paused before taking the driver’s seat to offer a prayer she’d written a few days before.

“Let’s take a moment of silence for the world we knew,” she said. “If you march to say ‘f*** you’ to Trump, I get that. But if you march to say ‘f*** yeah’ for women, for people of color, for the disenfranchised, I’ll be the first to hand you a megaphone. The fact is, today we know our world changes, but it’s not because Donald Trump says it does. It’s because we say it does. And we say how it does.

I’m sorry—are these people under the impressions that they won. And if they march, Donald J. Trump will no longer be president. I hope not. That’s just not reality. Trump won, you lost. It happens. Obama has left. His presidency is over, and now there’s a new sheriff in town. Get over it. There will be no Gestapo-like police force targeting groups of Americans. LGBT Americans won’t be targeted; Trump is the most pro-gay rights Republican ever-elected president. He may be pro-life. That doesn’t make him anti-woman. More importantly, the Left doesn’t have a monopoly on being agents of change. Even former President Obama acknowledged that Trump was a change candidate.

I have no problem with people marching and invoking their right to free speech and assembly, regardless if it infuriates me. Yet, this still looks like a mass exercise in delusion in the sense that American liberals have still not come to grips with why Hillary Clinton lost the election. A huge factor that contributed to her loss was not the Russians, racism, sexism, or misogyny. It was because she lost white women, especially white working class women who dot the Rust Belt and Middle America. And she lost them big league.