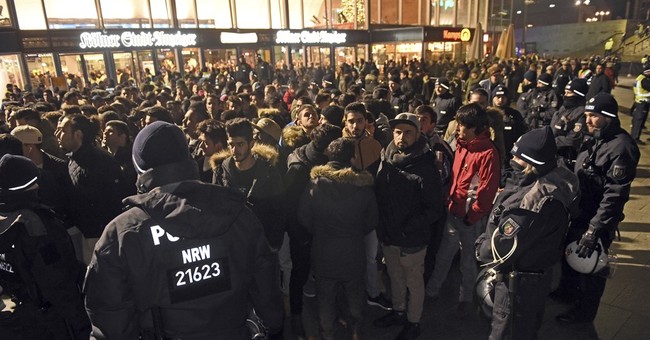 Last New Year's Eve was a shambles in Cologne, Germany, where scores of migrants sexually assaulted women in the city. At the time, police said that 700 men had participated in the violence. Ever since Chancellor Angela Merkel opened the floodgates to refugees, sexual assaults have spiked in Germany. To avoid another calamity, police screened 650 mostly North African men, setting up checkpoints at major transportation hubs (via Reuters):

German police said on Sunday they had prevented a repeat of the assaults and robberies suffered by hundreds of women in Cologne a year ago by screening 650 mostly North African men on New Year's Eve.

Police detained and screened many of the men at the main railway station as they headed towards the center of Cologne in western Germany, where the attacks a year earlier fueled criticism of Chancellor Angela Merkel's open-door migrant policy.

Cologne police chief Juergen Mathies did not say how many of the men were subsequently allowed into the city center but denied that the checks amounted to racial profiling. He also said many of those detained had been aggressive.

Well, it looks like Cologne had a safe New Year's celebration.