It's Official: This Race Is A Dead Heat, With Trump Surging With Working Class Whites 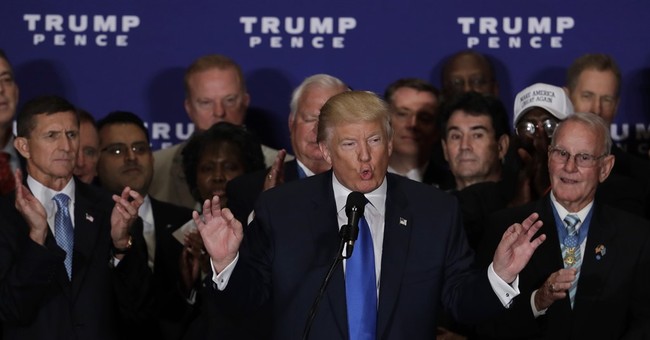 “Let the flop sweat begin.” Guy noted today how the polls are tightening to the point where Hillary has to be feeling the pressure heading into tonight’s debate. Yes, there were the NBC/WSJ and Associated Press/Gfk polls that had Clinton up six points over Donald Trump, but as Cortney wrote this morning—Bloomberg has Clinton’s lead being virtually erased by the Republican nominee. Moreover, FiveThirtyEight’s Nate Silver, one of the country’s leading data crunchers, said that this race is a dead heat. It’s official. In the latest Morning Consult poll of 1,712 likely voters, Trump leads Clinton by one point. As we head into the debate tonight, half of voters in the sample say that the debates will be somewhat important in how they vote in November:

In a nationwide poll of 1,712 likely voters taken Sept. 22 through Sept. 24, 39 percent of respondents chose Trump, while while Clinton was the choice for 38 percent. The difference between the two candidates is within the margin of error. The other candidates in the race continue to trail behind the leaders, with Libertarian nominee Gary Johnson at 9 percent and Green Party candidate Jill Stein at 4 percent; 10 percent of respondents say they don’t know or have no opinion.

In a head-to-head matchup without the third-party candidates, Clinton edges out Trump by 2 points among likely voters, 44 percent to 42 percent, within the margin of error.

Among the slightly broader sample of registered voters, Clinton has a 1-point lead over Trump, 37 percent to 36 percent, with Johnson at 9 percent and Stein at 4 percent. Again, the difference between Trump and Clinton is within the margin of error.

Independent voters have a less strong opinion about the debates, suggesting that the TV events be more important in terms of shoring up commitment from party affiliates than winning over undecided voters. Independents are less likely to watch Monday’s debate than either Republicans or Democrats; 54 percent of independents say they expect to watch, while 75 percent of Republicans and 70 percent of Democrats plan to tune in.

Pennsylvania is one of the must-win states for Trump to clinch the presidency, unless he works some miracles in Nevada, Colorado, and maybe New Mexico (though I think that’s the tallest order of the three). Yet, the latest CNN and Morning Call/Muhlenberg poll shows another dead heat there:

Clinton still leads Trump in a head-to-head matchup, but only by a 3-point margin, 44 percent to 41 percent. Those results showed Clinton's support dropping and Trump's gaining compared with a Morning Call/Muhlenberg poll a week earlier, which showed Clinton at 47 percent and Trump at 38 percent.

In a four-way matchup, Clinton leads by 2 points, at 40 percent to Trump's 38 percent. Libertarian Party candidate Gary Johnson dropped to 8 percent — down from 14 percent a week ago — and Green Party nominee Jill Stein went from 5 to 3 percent.

A demographic analysis showed a double-digit jump in Trump's support among Republicans after Trump underperformed with that group previously. This week, 85 percent of likely GOP voters said they'd choose him over Clinton, compared with 71 percent in the prior survey.

The poll also asked voters whether their support for Clinton or Trump stemmed more from that candidate's qualities or from a dislike of the other option.

The results were similar for both candidates: A slightly larger group said they were voting for the candidates rather than against their opposition, but not by much.

Two things: One, being a stickler for criterion, this poll would hold a little more water if the sample was at least 600 people, which is the average to accurately gauge a statewide race. Second, on a more positive note, it seems as if the Republican base is coming home. They may not like Trump, but they cannot stand Hillary Clinton. If the rallying cry mostly revolves around stopping her, we should be fine with that. As long as we can get the base united around something after a 15+-candidate slaughter fest that ended with a person that no one really wanted, but alas, here we are about to debate one of the most formidable political operations in the country. Moreover, and this is a question that I’ve been grappling with all of 2016, what would be better a Republican Congress working with a Trump White House or a Clinton presidency at the helm of what will be essentially a third Obama term, running that agenda through a Democratic Congress? A unified Democratic government gave us the stimulus and Obamacare; both have failed with regards to jump-starting the economy and making health care more affordable. You really want to see what would happen when the Second Amendment, energy (CPP, coal workers etc.), The Supreme Court, and other issues are placed in the crosshairs of Hillary Rodham Clinton. The choice is clear in this scenario: it’s Trump.

Over at Hot Air, Allahpundit added that the Keystone State is chock full of Undecideds who could be watching closely what happens tonight and the next two presidential debates. Also, he delved into the Wapo/ABC News poll released yesterday showing that Trump is netting the margins he needs with white voters without college degrees—and how that surge may not be ending. At the same time, any meaningful edge to gain from this is countered by Clinton’s domination with college-educated women:

… [M]ore Trump voters in PA say they’re voting for him than against Hillary, which is unusual. All summer, “against Hillary” has typically scored higher among Trump backers than “for Trump” has. Something has changed, at least temporarily, to make the people supporting him feel more confident about him. The fact that he’s still polling in the high 30s in a state he badly needs to win isn’t great news, but given that Clinton has been stuck at 40 for two weeks, that says less about Trump’s weakness vis-a-vis Hillary than it does about the reality that there are lots of undecideds in Pennsylvania. More than 20 percent of the electorate is still in play with three debates to come.

Trump leads among white men without a college education by 59 farking points. That’s exactly the sort of world-beating margin he needs among his base to pull this off. And his margin might not be done growing.

Romney won that group by 31 points in 2012. Trump’s path to victory has always required him to outperform Mitt among working-class white men and now he’s doing it, by historic margins. Which raises the question: How is he still behind? If he’s crushing it among white men without a college degree and winning white women without a college degree and college-educated white men by double digits, how can he be losing? The answer is Hillary’s advantage among college-educated women, which has grown over the last two weeks from a 10-point lead to a 25-point lead(!) now.

Are these exactly the voters who sat out in 2012? Sean Trende at Real Clear Politics has spoke about the 3-4 million white voters, who just didn’t vote in that last election since Obama was too liberal and Mitt Romney offered them nothing regarding his economic agenda. And, as Trende noted, these are voters who live in counties that stretch in a diagonal motion from upstate New York down into Arizona. These are the voters that Ross Perot resonated well with in 1992—and those voters would certainly be open to a candidate like Donald Trump. If that’s the case, it looks like they’re coming out of the woodwork for him. Still, the window to cobble together enough voters to squeak out a win is rapidly closing. Moreover, while there could be many Undecideds in Pennsylvania, that state has always been cruel to Republicans post-1988.

So, what to do? Should Trump camp out in Pennsylvania, as Guy has suggested in the past or do a two-pronged assault in Nevada and Colorado? Winning PA ensures a Trump victory; winning Colorado and Nevada ends with the same result. Let’s see if these debates can shake up the map.