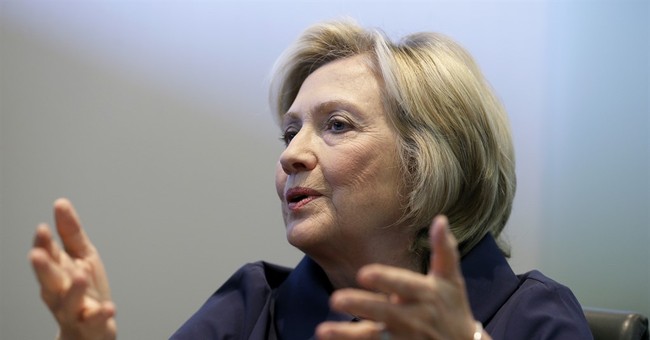 Hillary Clinton is having trouble taking responsibility for her private email system. As The New York Times  reported, On Friday, she told MSNBC’s Andrea Mitchell that she was “sorry that this has been confusing to people and has raised a lot of questions.” On Monday, she gave no apology, saying her email systems “was allowed.” Earlier this evening, she was on the verge of owning her mistake in an interview with ABC News’ David Muir, where she said that her private email account “was a mistake. I’m sorry about that. I take responsibility.”

For weeks, several of Mrs. Clinton’s advisers had privately said they hoped she would acknowledge a mistake in clearer, blunter terms.

But others on her team, saying they were bound by the constraints of a complex situation, with several investigations under way, argued that Mrs. Clinton was limited in her ability to defend herself.

For her part, Mrs. Clinton had long insisted that the controversy was a news media fixation and argued that voters had not raised it with her on the campaign trail.

Well, now we’re back to the “I’m sorry for all the confusion” position, as indicated by this answer she gave in an interview with Ellen DeGeneres. The interview will air on Thursday.

Here is Clinton's full answer on emails to @TheEllenShow. pic.twitter.com/MxoFiqVSOc

So, what was the point of all of this? Why even entertain the aspect of an apology when she doesn’t really mean it? Allaphundit says it’s a way for dynasties in American politics, whose nomination to the presidency from the party of which they are members of, can “genuflect” at the altar of democracy, thereby making the notion that she’s entitled to the Democratic Party’s 2016 nomination somewhat less displeasing:

The special “charm” of candidate Hillary, especially this year’s version, is that everything she says is so obviously scripted and carefully focus-grouped that the sincerity that’s supposed to appeal to you in the apology evaporates instantly upon utterance. She’s checking a box here and you know it, and she knows that you know it, in which case what’s the point? It’s like her showing up to those equally carefully scripted roundtable sessions with handpicked “average voters” and nodding thoughtfully as everyone presents the issues that are important to them. It’s something she’s obviously doing because she feels obliged, not because she wants to, and everyone understands that, yet she insists on doing it anyway and we sort of insist that she do it even though the whole thing is a charade and is known to be such. Why is that? My theory is that it’s Hillary concession to the idea that you need to work to win the presidency, even if your nomination is a fait accompli and no one’s impressed at all with your retail skills. It’s a way for a wealthy dynastic candidate to genuflect towards democracy, which makes the feeling that she’s entitled to the nomination a bit less grating.

Clinton finally turned over her private email server to the Department of Justice in August. The FBI found that there was at least one attempt to wipe the server clean. In the ensuing analysis, over 300 emails were flagged due to concerns that they had classified material on them; Clinton has denied sending emails with sensitive information through that server.

Right now, her campaign is in a free fall in New Hampshire and Iowa, so it seems that voters are appearing to notice. If not, she’s losing because she’s an awful candidate (which is true), so it’s either the email story or her incompetence that’s sinking the S.S. Clinton in the early voting states.

Last Note: Via the Free Beacon: