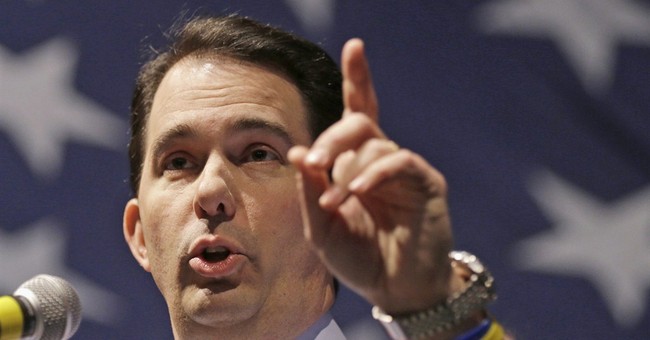 He endured massive protests and a contentious 2012 recall election, but Gov. Scott Walker of Wisconsin has been vindicated in his efforts to curb union power in the state. The Wisconsin Supreme Court upheld his collective bargaining reforms he enacted in 2011, ruling them constitutional (via Associated Press):

The fight over Wisconsin Gov. Scott Walker's signature policy achievement, a law effectively ending collective bargaining for most public employees, ended Thursday with the state Supreme Court declaring it to be constitutional.

The 5-2 state Supreme Court ruling is another major victory for Walker as he heads into the statewide election. Federal courts twice said the law, which limits public workers to bargaining only over base wage increases no greater than inflation, constitutional.

The law also requires public employees to contribute more toward their health insurance and pension costs, bars automatic withdrawals from members' paychecks and requires annual elections to see if members want their unions to go on representing them.

In a two-sentence statement issued Thursday, Walker praised the ruling and claimed the law has saved taxpayers more than $3 billion — mostly attributable to schools and local governments saving more money because of the higher contributions.

"Today's ruling is a victory for those hard-working taxpayers," Walker said.

It was challenged by the National Association for the Advancement Of Colored People (NAACP) and the League of Women Voters. The NAACP argued that the requirement wouldn’t protect the integrity of the elections and “severely burden a significant number of qualified voters,” according to the Wisconsin State Journal.

The law already was ruled unconstitutional by a federal court judge in Milwaukee this spring, meaning that Thursday's rulings have no immediate effect. That federal court decision is under appeal.

The NAACP, Voces de la Frontera and others had argued in their case that the law was unconstitutional because it would severely burden a significant number of qualified voters and was not necessary to prevent fraud. And the League of Women Voters argued that requiring voter ID was an additional "elector qualification" beyond what was required by the state Constitution.

In the case brought by the League, the law was upheld on a 5-2 vote with Chief Justice Shirley Abrahamson and Justice Ann Walsh Bradley dissenting.

In the NAACP case, the law was upheld on a 4-3 vote with Abrahmson, Bradley and justice Patrick Crooks dissenting.

In a scathing dissent in the League's case, Abrahamson wrote, "Today the court follows not James Madison -- for whom Wisconsin's capital city is named -- but rather Jim Crow -- the name typically used to refer to repressive laws used to restrict rights, including the right to vote, of African-Americans."

Again, this isn’t a poll tax, a literacy test, or anything resembling Jim Crow laws, but that’s a discussion for another time.

Right now, Gov. Walker is in the fight for political life. It also didn’t help news media engaged in shoddy reporting and bias (shocker, right?) regarding Gov. Walker’s alleged illegal coordination with outside conservative groups during his recall election.

Partisan Democratic district attorneys, as reported by our own Guy Benson, executed the so-called “John Doe” investigations, which were subsequently gutted by the state and federal courts. But, the media got their hands on a rejected subpoena, so you know, scandal.

Not something you want disseminated when you're in a statistical dead heat with your Democratic opponent, but key legal victories nonetheless.