McCain Throws Hagee Under the Bus 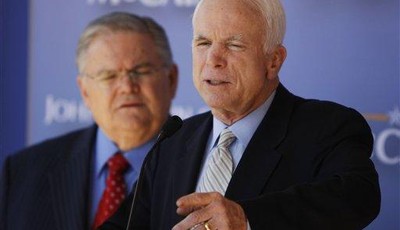 “Obviously, I find these remarks and others deeply offensive and indefensible, and I repudiate them. I did not know of them before Reverend Hagee's endorsement, and I feel I must reject his endorsement as well,” McCain said in a statement to CNN Thursday."

... The attacks on Pastor John Hagee are nothing more than an attempt at character assassination.  Of course, it makes sense that the Left would want to find a way to seek revenge or a "pay back" for the Rev. Wright scandal (though if they really wanted to do that, they'd go after Hillary Clinton's pastor).  It's also an attempt to win back Jewish voters to the Democratic Party -- especially since Obama has his own problems in this area (as I write this, Obama is delivering a speech about Israel).

While we cannot control the Left's attempts to mischaracterize Hagee and McCain, we can expect John McCain to display more toughness than this.

For an explanation on this, read:  McCain's Campaign to Appease The Left.

Liberal Reporter: Fake Media Narratives About the GOP and the COVID Vaccine Aim to Accomplish One Thing
Matt Vespa