The Feminization of Hillary Rodham 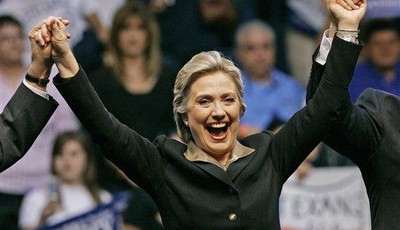 There was a point toward the end of last night's debate in which Hillary Clinton turned sentimental, and almost became a sympathetic figure.

“You know, no matter what happens in this contest – and I am honored to be here with Barack Obama...”, she said.

(It wasn't so much what she said, as it was the way she said it).  This admission was not nearly as effective at casting her in a sympathetic light as what happened in New Hampshire when her eyes "misted up," but was effective, nonetheless at making her sympathetic.  Unfortunately for her, this was undone by her earlier attacks on Obama for "plagiarism" (she said Obama represents "change you can Xerox").

On those rare occasions when Hillary becomes real -- daresay even "feminine"  -- she is a much more appealing candidate.  And had she presented more of this personality earlier on, she may be better off today.  Who knows why we only see glimpses of this side of her.  Perhaps she feels she needs to be the "Iron Lady," to be taken seriously?

Unfortunately for her, Clinton now faces a catch-22:  She cannot overcome Obama without attacking him, but she also cannot defeat a candidate of "hope" and "change" by being a "cold," "mean" candidate.

Were I advising her, my recommendation would be to cast herself as a more friendly, soft, sympathetic candidate. Let her surrogates make the attacks.  That's what surrogates are for.

This strategy may help her overtake Obama, but even if not, it would help repair her image, should she fall short of the nomination.