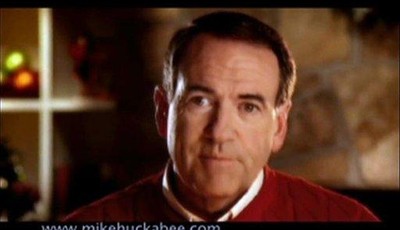 There's been a lot of talk about Huckabee's Christmas ad featuring the "flying cross" -- or bookshelf -- depending on whom you ask.

As you may have heard, liberal ad gury Donny Deutch described the ad as "frightening."

I wanted to ask a professional Republican ad man his thoughts on this, so I talked to Paul Wilson of Wilson Grand Communications.

Wilson believes the flying cross was most likely a happy accident.  According to Wilson:

Technically they "could" have done the shot two ways:

Green screen and passing (floating) a full motion picture of the sceene behind him.

The second way is to have the Governor sit there and have a dolly on a track move to let the background "spin" as we say in the biz.

Here's my guess what happen.   They wanted to reveal the Christmas tree.  So whichever way they did the shot the tree had to "appear."   Either live with the dolly as they started to see the shot for the 3rd or 4th take they "discovered" what they had created--the floating cross.  They then said "cool" -- that works.

'End of the Era'? What Is CNN's Don Lemon Going to Do Now?
Matt Vespa
Will There Be An Ethics Investigation After Eric Swalwell Blew Up at GOP Staffer?
Matt Vespa
Israeli Man Dead, Others Injured as Rockets Launch into Residential Communities
Landon Mion
Walmart, Costco Among Stores Dropping Mask Mandates for Vaccinated Customers
Landon Mion
Withdrawn Biden Cabinet Pick Will Be Involved in Administration After All
Rebecca Downs
Former Pastor Says Her Move to OnlyFans Has 'Made Her a Better Mom'
Landon Mion
CARTOONS | AF Branco
View Cartoon
Most Popular