An Awards Show Worth Watching 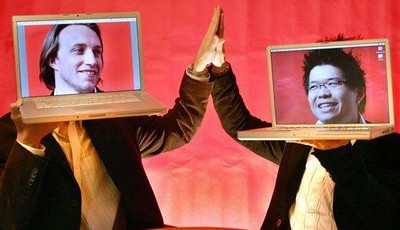 They're the YouTube awards, and you don't even have to watch them on TV:

Lonelygirl15, OK Go and other YouTube sensations will get an opportunity to walk down a virtual red carpet.

Thevideo-sharing Web site announced Monday that it will hold the firstYouTube Video Awards to recognize the best user-created videos of 2006.

With this kind of thing, there's always a worry whether a new, edgy entity like YouTube is poking fun at the awards show model or whether it's just indulging in the same self-importance of the rest of the entertainment industry. After all, there was a time when MTV's movie and music awards were more a comment on the silliness of awards shows than awards shows in their own right. Nowadays, however, MTV's pageantry can be just as mind-numbing, predictable in its staged wackiness, and achingly long as any other ceremony.

YouTube's awards may meet that fate someday, but they're safe so far, it seems. First, there are only seven categories:

The awards will be handed out in sevencategories: most creative, most inspirational, best series, bestcomedy, musician of the year, best commentary and "most adorable videoever."

Now, I'm a little biased in that I think they could have used a politics category. After all, YouTube has been a serious, driving force in American politics over the past couple of years, and it shouldn't ignore that phenomenon, which will undoubtedly continue to work its Macaca magic on the electoral system.

But I appreciate the minimalism. You can, of course, vote for your favorites, here.

Go enjoy the non-awards show before it eventually turns into an awards show like all the rest. Winners are announced Friday. Another benefit of an Internet awards show-- quicker results.