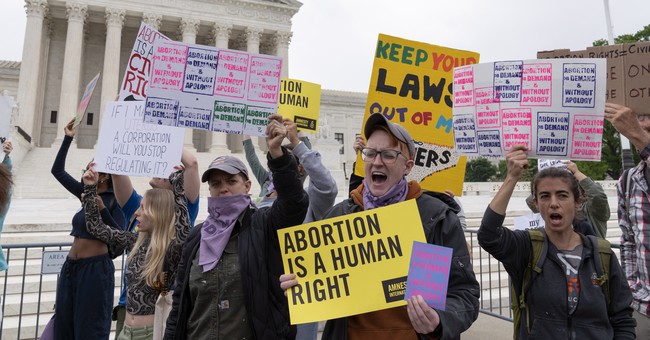 The American Medical Association said Tuesday that it will take legal steps to protect women seeking an abortion and doctors who carry out the procedure.

The AMA shared the statement on their website. In the statement, the organization called abortion restrictions a “violation of human rights” and said it will “seek expanded legal protections for patients and physicians against government systems of control and punishment that criminalize reproductive health services.”

The AMA’s statement comes ahead of a ruling in the abortion case Dobbs v. Jackson Women’s Health Organization, which could overturn landmark case Roe v. Wade. A leaked draft opinion from the case last month showed the justices poised to overturn Roe.

CHICAGO – Responding to the growing threat of over-policing and surveillance of reproductive health services, the nation’s physicians and medical students at the AMA Annual Meeting adopted policy recognizing that it is a violation of human rights when government intrudes into medicine and impedes access to safe, evidence-based reproductive health services, including abortion and contraception.

In accordance with the new policy, the AMA will seek expanded legal protections for patients and physicians against government systems of control and punishment that criminalize reproductive health services.

In alignment with the AMA’s longtime opposition to the criminalization of medical practice, the AMA will continue to challenge criminal or civil penalties on patients who receive reproductive health services, as well as physicians, other health professionals, health systems, and patient advocates for aiding, assisting, supporting, or providing reproductive health services or referrals to patients.

The new policy strengthens the AMA’s long-held position opposing political intrusions into the practice of medicine that infringe on the patient-physician relationship and compromise patient access to safe, evidence-based medical care.

In an amicus brief filed to U.S. Supreme Court in the case of Dobbs v. Jackson Women’s Health Organization, , the AMA along with dozens of leading medical organizations stated that abortion is safe medical care that is a decision to be made between the patient and the physician, subject to the physician's clinical judgment, and the patient's informed consent. An AMA viewpoint published last fall in advance of the Supreme Court oral arguments discusses AMA policy on abortion.

Townhall has covered how states like Oklahoma, as well as Idaho, Arizona, and Florida, have created laws in recent weeks protecting the unborn. Other states, such as Maryland, Colorado, and California, have gone in the opposite direction by enshrining abortion access in state law or allocating more funds to put towards abortion.

In April, Maryland lawmakers overrode GOP Gov. Larry Hogan’s veto on a law that would allow non-physicians to perform abortions and allocated millions of state funds to abortion training programs for midwives, physician assistants, and other medical professionals.

If Roe is overturned, several states have "trigger" laws on the books that would limit abortion automatically. However, state attorneys general Dana Nessel of Michigan and Josh Kaul of Wisconsin have both stated they will not enforce their state's pre-Roe abortion bans.