Bizarre Twist: Family Freed From Afghan Hostages Refusing to Return to US 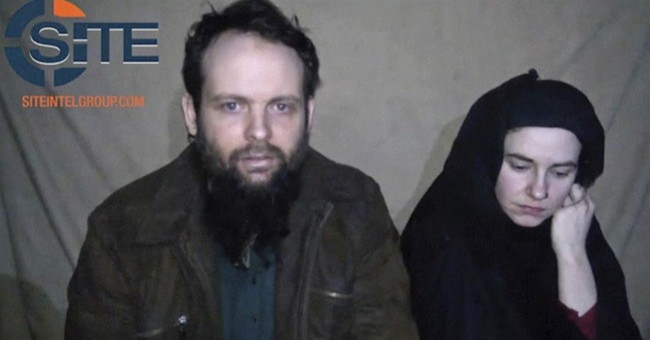 The White House announced the negotiated release of an American woman and her family Thursday, all of whom had been held hostage in Afghanistan by the Taliban-linked Haqqani network since 2012.

Caitlin Coleman, 32, was traveling with her Canadian husband in Afghanistan when they were kidnapped. She was pregnant at the time and had two more children in captivity.

"Today they are free. This is a positive moment for our country's relationship with Pakistan," President Trump said in a statement. "The Pakistani government's cooperation is a sign that it is honoring America's wishes for it to do more to provide security in the region."

But things took a bizarre twist Thursday afternoon when officials said the woman’s husband, Josh Boyle, was refusing to leave the country.

But Boyle is refusing to board an American military plane in Pakistan waiting to take them home, fearing he'll be arrested, a U.S. official said.

The family has "been essentially living in a hole for 5 years," White House Chief of Staff John Kelly told reporters Thursday.

Boyle was previously married to the sister of Omar Khadr, a Canadian man who spent 10 years at Guantanamo Bay after being captured in 2002 in a firefight at an Al Qaeda compound in Afghanistan.

The Canadian-born Khadr was 15 in 2002 when he tossed a grenade in a firefight that killed U.S. Army Sgt. 1st Class Christopher Speer, a special forces medic.

One U.S. official told The Associated Press that Boyle was nervous about being in "custody" given his background. [...]

The couple has told U.S. officials that they wanted to fly commercially to Canada, according to an official who spoke to The Associated Press.

Until their release this week, they were last seen in a December 2016 hostage video pleading for their governments to intervene.

“Please don’t become the next Jimmy Carter,” Coleman said in the video, addressing former President Obama. “Just give the offenders something so they and you can save face so we can leave the region permanently.”

Details regarding the operation that freed the family are still unknown, but sources told Fox News that the effort to secure the family’s release was being worked on for along time and included putting pressure on the Pakistani government to help. The source also told Fox the U.S. did not pay for the family’s release.