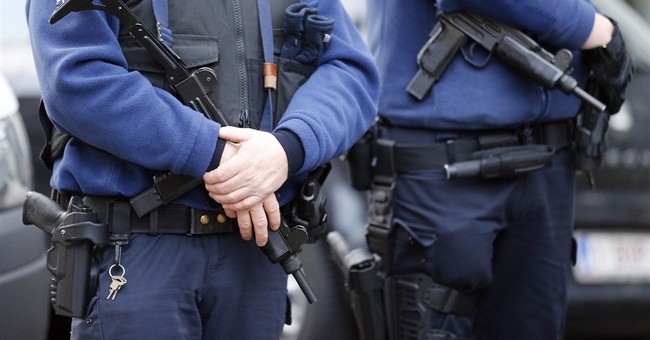 When witnesses in the same building as Charlie Hebdo saw masked men with heavy weaponry enter the building they called police, like anyone in their position would do. But the three unarmed officers on bikes who showed up proved to be most unhelpful in the situation.

According to the witness, the officers had to retreat after seeing the men were heavily armed.

That wasn’t the only instance during the three-day terror spree where police found themselves utterly unprepared to take on the jihadists.

The 27-year-old policewoman who was gunned down just south of Paris while attending a traffic accident was unarmed, as was her partner, who could do nothing to stop the gunman.

Now, after three police officers were killed during the attacks in France, a plot to murder police officers in Belgium was foiled, and a posthumous video of Amedy Coulibaly, one of the French jihadists, admitting his plan was to attack police all along, some European law enforcement agencies are beginning to think differently about how, when, and which police should be armed.

On Monday, French law enforcement officials demanding heavier weapons, protective gear and a bolstered intelligence apparatus met with top officials from the Interior Ministry. An official with the ministry, speaking on condition of anonymity to discuss ongoing talks, said automatic weapons and heavier bulletproof vests were on the table. [...]

Unlike their British counterparts, French national police are armed although their municipal counterparts tend to be weaponless. But Thooris said they are not permitted to have their service weapons while off duty, raising the possibility that they could be targeted when vulnerable or unable to help if they stumble across crime afterhours.

Because of increasing unease and last week's anti-terror raids, police in Belgium are again allowed to carry weapons home rather than put their handguns and munition in specialized lockers. [...]

In Britain, the overall threat level is "severe" — meaning intelligence and police officials have evidence that a terrorist attack is highly likely. The threat to police officers themselves is judged to be very high after the Paris attacks as well as the recent disruption of a reported Islamist extremist plot to attack individual police officers in west London.

In response, the Metropolitan Police said Sunday it is bolstering the deployment of specialist firearms officers who are authorized to carry weapons. The force, also known as Scotland Yard, declined to provide details, and senior police officials say there is no need for a wholesale policy shift that would arm all police.

"We have seen from the declarations of Coulibaly and also from what happened in Belgium that police can be primary targets for terrorist groups,” Nicolas Comte, of the SGP police union in France, told the Associated Press. "We have to give the means to police services, and notably intelligence, to fight this new form of terrorism."

Editor's note: This article has been updated for clarity purposes.