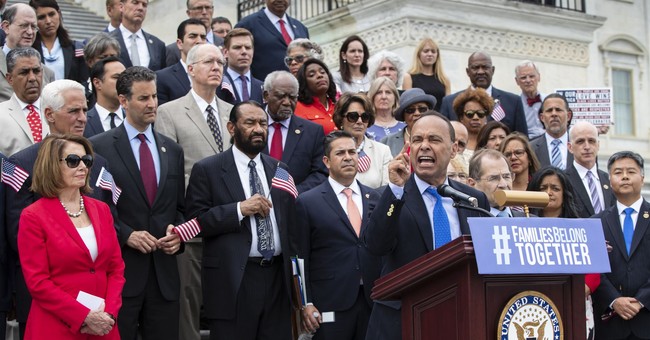 Rep. Luis Gutierrez (D-IL) berated Department of Homeland Security Secretary Kirstjen Nielsen as she testified before the House Judiciary Committee Thursday. He said that the Trump administration would have killed baby Jesus through its immigration policies.

“It is repugnant to me and astonishing to me that during Christmas, I like to call it the holiday season to be inclusive, but during Christmas the majority always wants to just call it Christmas,” he began, “a time in which we celebrate the birth of Jesus Christ, a Jesus Christ who had to flee for his life with Mary and Joseph. Thank God there wasn’t a wall that stopped him from seeking refuge in Egypt. Thank God that wall wasn’t there, and thank God there wasn’t an administration like this or he would have too perished.”

SECRETARY NIELSEN to @RepGutierrez after he accused her of lying about Trump administration's family separation policy: "Calling me a liar are fighting words. I'm not a liar."

GUTIERREZ gets up and walks away. pic.twitter.com/YCNA0Sn5Zv

He then berated Christians who disagreed with him on immigration, claiming they were separating families.

“Shame on everybody that separates children and allows them to stay at the other side of the border fearing death, fearing hunger, fearing sickness,” he continued. “Shame on us for wearing our badge of Christianity during Christmas, and allowing the secretary to come here and lie.”

Secretary Nielsen responded that calling her a liar was “fighting words.”

“I’m not a liar, we’ve never had a policy for family separation,” she emphasized.

Gutierrez stormed out of the hearing as she was still replying and she noted his departure.

“As far as not being compassionate, let me just tell you what I have done,” she said, “and of course he couldn’t be bothered to stay so I’m happy to tell the rest of the committee. What we have done is we have worked extensively with the northern triangle countries to find ways to help vulnerable populations as soon in their journey as possible.”

“I take personal offense on behalf of the 240,000 men and women of the Department of Homeland Security,” she added.