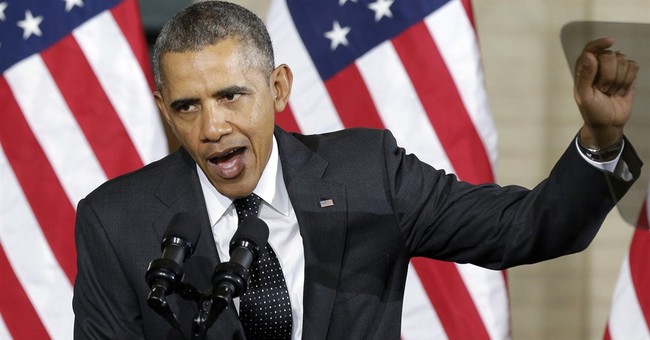 President Obama has made liberal use of "executive action" throughout his presidency, and pledged to make even more use of executive action in this year's State of the Union speech. He seems to think that because Republicans don't want to implement his agenda, he can go around Congress.

The Heritage Foundation is out with a new report on President Obama's executive actions, titled "An Executive Unbound," finding that "abusive, unlawful, even potentially unconstitutional unilateral action has been a hallmark of the Obama Administration." They've also compiled a list of the top ten abusive executive actions taken by the President.

1. Amending Obamacare’s employer mandate, providing an unauthorized subsidy to congressional staff, and encouraging state insurance commissioners not to enforce certain requirements.
2 Inventing labor law “exemptions” in violation of the WARN Act so that workers would not receive notice of impending layoffs days before the 2012 election.
3. Waiving the mandatory work requirement under the 1996 comprehensive welfare reform law, which required able-bodied adults to work, prepare for work, or look for work in order to receive benefits under the Temporary Assistance for Needy Families (TANF) program.
4. Ignoring a statutory deadline and refusing to consider an application related to nuclear waste storage at Yucca Mountain, which activists sought to block for years.
5. Circumventing the Senate’s duty to provide advice and consent on appointments and instead making “recess” appointments in violation of Article II, Section 2 of the Constitution when the Senate was actually in session.
6. Deciding not to defend the constitutionality of the federal definition of marriage in court.
7. Implementing Common Core national standards through strings-attached waivers from the No Child Left Behind Act.
8. Intimidating Florida to stop its voter roll cleanup, which included removing ineligible voters such as noncitizens, before the 2012 election.
9. Imposing the DREAM Act by executive fiat under the guise of “prosecutorial discretion.”
10. Refusing to enforce federal drug laws in states that have legalized marijuana.

Heritage's entire report is an excellent read - and these are ten of the most egregious actions of the Obama Administration.