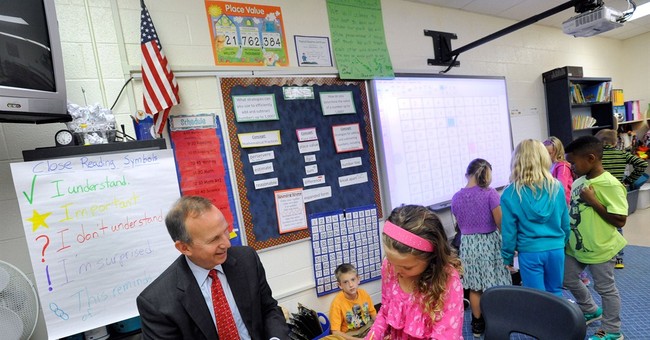 The Common Core agenda - the plot to nationalize school standards and take autonomy away from state and local education authorities - has been proceding behind the scenes.

Michael McShane and Frederick Hess of the American Enterprise Institute write about Common Core's "slippery slope" and the attempts of Common Core advocates to hide it:

The Common Core opens the door much wider for Washington to meddle in schooling. The experience of the Bush-era No Child Left Behind Act is instructive. Initially, NCLB limited federal authority over how states would set standards, select tests, and improve teacher quality. In recent years, however, the Obama administration has used its ability to issue “waivers” from NCLB to push states to adopt the Common Core, sign onto certain tests, and evaluate teachers in specified ways. There’s much precedent for worrying about slippery slopes.

In fact, for all their lip service to federalism, few Common Core advocates give the impression that they worry about extending Washington’s reach. Many have avidly supported Obama initiatives that have increased Washington’s authority. The “state-led” talking points look more like advocates trying to address a short-term political problem.

The result is a dishonest debate, in which advocates refuse to acknowledge what they really think it’ll take for the Common Core to deliver on their grand ambitions for the program. That can create problems of its own: See the troubled rollout of health-care reform, where promises made for political reasons have yielded fierce backlash and immense implementation challenges.

The comparisons to both the federal health exchange and President Bush's No Child Left Behind are apt. The driving ideology behind these kinds of initiatives is that the top-down technocratic elite (usually in Washington DC) can set policy and make rules better than the people who actually live in the states that will be affected.