Biden Says He Wants to Keep Schools Open, But There May Be a Catch for Kids 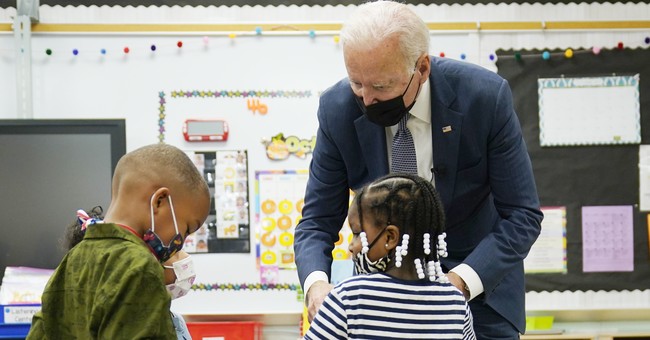 Speaking at the National Institutes of Health in Bethesda Thursday afternoon, President Joe Biden laid out his strategy to combat Wuhan coronavirus going into the winter.

During his remarks, Biden explained his administration wants to keep schools open and can do so as long as children are vaccinated.

"The President will announce new actions to get kids vaccinated and ensure that schools stay open. The President will announce new actions to get more kids ages 5 and older vaccinated and to keep our schools open. When the President came into office, more than half the schools in our country were closed," the White House released ahead of the speech. "The steps the President is announcing today will ensure that remains the case. As we face the Omicron variant, we now have an important new tool: vaccines for kids ages 5-11...Vaccinating our kids protects them, keeps schools open, and protects everyone around them."

But knowing the disease's impact on children, combined with a lack of longterm data on the vaccine, many parents are questioning whether their kids really need to be vaccinated.

If the Biden Regime cared about kids, we’d be talking about this. pic.twitter.com/EqutS8hCxr

Given the teachers unions, specifically the American Federation of Teachers, was pushing around the CDC earlier this year and writing guidance on school reopenings, parents should brace themselves for demands that children take the jab if they want their schools open. As reminder from the New York Post:

The American Federation of Teachers lobbied the Centers for Disease Control and Prevention on, and even suggested language for, the federal agency’s school-reopening guidance released in February.

The emails were obtained through a Freedom of Information Act request by the conservative watchdog group Americans for Public Trust and provided to The Post.

The documents show a flurry of activity between CDC Director Dr. Rochelle Walensky, her top advisors and union officials — with Biden brass being looped in at the White House — in the days before the highly-anticipated Feb. 12 announcement on school-reopening guidelines.

Emails show a call between Walensky and Weingarten — the former boss of New York City’s United Federation of Teachers — was arranged for Feb 7.

The lobbying paid off. In at least two instances, language “suggestions” offered by the union were adopted nearly verbatim into the final text of the CDC document.

With the CDC preparing to write that schools could provide in-person instruction regardless of community spread of the virus, Trautner argued for the inclusion of a line reading “In the event of high community-transmission results from a new variant of SARS-CoV-2, a new update of these guidelines may be necessary.” That language appeared on page 22 of the final CDC guidance.

The AFT also demanded special remote work concessions for teachers “who have documented high-risk conditions or who are at increased risk for … COVID-19,” and that similar arrangements should extend to “staff who have a household member” with similar risks. A lengthy provision for that made it into the text of the final guidance.