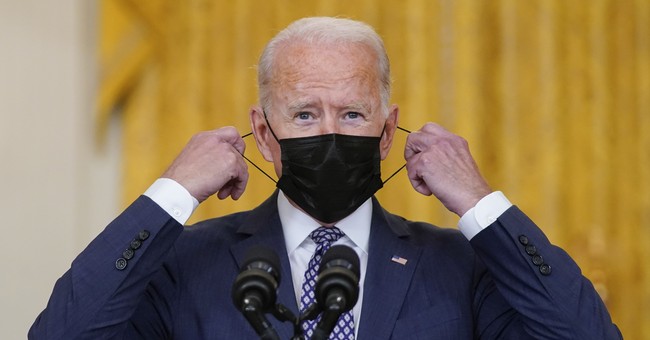 President Joe Biden signed multiple pieces of legislation from the fake White House set in the Eisenhower Office Building Tuesday morning. During the event, he repeatedly took off his mask to turn toward attendees to speak.

The bills on the desk were the Protecting Moms Who Served Act of 2021, Hire Veteran Health Heroes Act of 2021, Colonel John M. McHugh Tuition Fairness for Survivors Act of 2021 and a bill Requiring GAO to Report on the Disparities of Race and Ethnicity in Administration of VA Benefits.

Before signing, Biden started to read the title of the legislation and then gave up. Previously, he gave a brief summary of each bill.

Shortly afterward, Biden started speaking off-script, which prompted the White House tech team to cut his microphone and blast music over the livestream.

"The music – 'God Bless America,' an instrumental version – came up as he finished, cutting off the president's exchange with an 11-year-old audience member," the White House pool report states. "The president remained on the stage, posing for photos with his guests."