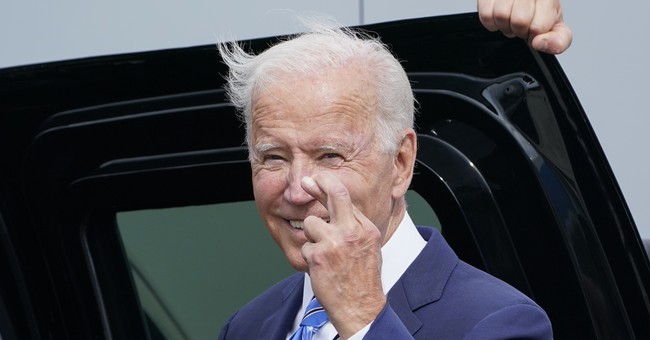 President Joe Biden is on Capitol Hill Thursday morning as he gets set to announce Democrats and far left socialists have reached a deal on how to move forward with his Build Back Better spending agenda.

"Everybody’s on board," Biden told the White House Press pool. "It's a good day."

The new reconciliation framework, coming in at $1.7 trillion, includes universal pre-school and billions of dollars for "climate change." The White House released details while Congress works to write a bill. Here are the toplines according to the Biden Administration.

The most transformative investment in children and caregiving in generations.

The largest effort to combat climate change in American history.

The biggest expansion of affordable health care in a decade.

The most significant effort to bring down costs and strengthen the middle class in generation.

The Build Back Better framework is fully paid for.

After months of tough and thoughtful negotiations, we have a framework that I believe can pass.

The White House claims the bill will not be paid for by anyone making less than $400,000 per year. The framework shows doubling funding for the IRS.

In other words, this is the part where Democrats want to hire 87,000 new IRS agents to spy on Americans' back accounts. @GOPLeader will be leading a discussion on Dems' "IRS Surveillance" plans this morning at 10am. Watch here: https://t.co/Xowl3SVMxZ https://t.co/FxuzCdXTjj

Given that the bill isn't written yet, it is unclear if it will actually pass.

Nobody is buying — Ds or Rs — that any meaningful framework of the social spending bill actually exists. This is all face saving theater so Biden can go to Brussels without wholesale embarrassment. And again, how does this get paid for?