Donald Trump Jr. Thanks Washington Post for the 'Greatest Correction in History' 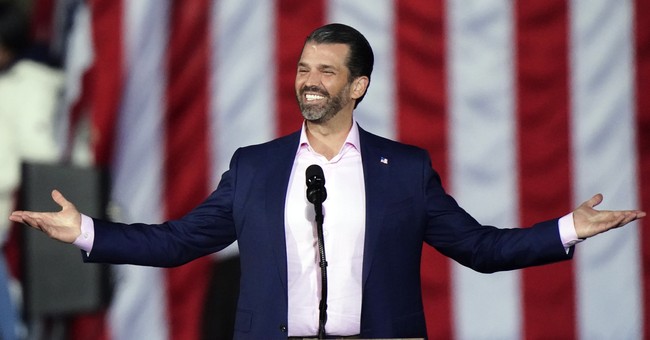 Over the weekend, The Washington Post published a story about Donald Trump Jr. speaking at a recent event in Georgia.

"The former president's son, Donald Trump Jr., has repeatedly promoted the meme, and the original chant, on his social media feeds. At a speech in Georgia, he took the stage after the crowd had been chanting, 'USA! USA!' and roared, 'There's a couple other chants I've been hearing going around. Have you heard the other one that's been going around?' The crowd took the cue and broke into cries of 'Let's go Brandon,'" the paper originally reported.

But they misquoted the crowd and Trump Jr. demanded a correction.

I demand a retraction and a correction. https://t.co/vM5omnnueB

Hey @AshleyRParker. The Don Jr speech that you reference here took place in Georgia on September 22, 2021. The “Let’s go Brandon” chant started after an October 2, 2021 event at Talladega. When are you going to correct your garbage story? pic.twitter.com/IU0wGWNQdr

After hours of pressure, the paper finally issued a correction.

"Correction: A previous version of this article incorrectly said a crowd broke into a 'Let's go Brandon' chant during a Donald Trump Jr. speech in Georgia. The crowd broke into a 'F--- Joe Biden!' chant at that speech in September. The error, which was inserted by an editor, has been corrected," the paper stated.

This is the greatest correction in the history of journalism!

Name the anonymous editor that inserted the fake news into the story.

Democracy dies in the darkness! https://t.co/QYBpbCoHIv