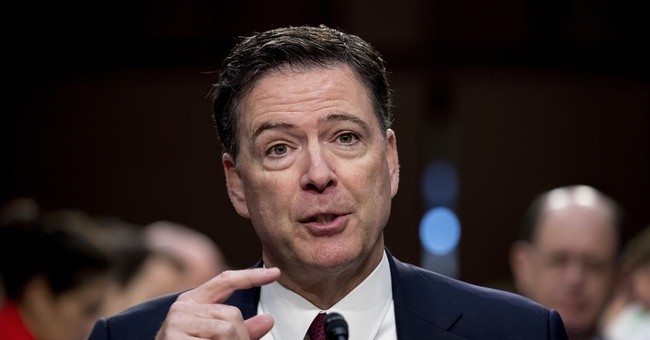 Unfortunately the drafts are completely redacted, but take note of the date: May 2, 2016.

As shown by the FBI's tweet, the final statement about the case was delivered on July 5, 2016 but was being drafted in May. This was two months before Comey made the official announcement that Clinton would not be referred to the Department of Justice for criminal prosecution. It was also before Comey had interviewed nearly a dozen key witnesses in the case, including Clinton herself. Clinton was interviewed on July 2, 2016 for just under four hours.

The release of the drafts backs up the assertion from Senate Judiciary Chairman Chuck Grassley that Comey decided long before FBI investigators were done with the case that Clinton would not face charges.

"According to the unredacted portions of the transcripts, it appears that in April or early May of 2016, Mr. Comey had already decided he would issue a statement exonerating Secretary Clinton. That was long before FBI agents finished their work.  Mr. Comey even circulated an early draft statement to select members of senior FBI leadership.  The outcome of an investigation should not be prejudged while FBI agents are still hard at work trying to gather the facts," Grassley and Committee member Lindsey Graham wrote in a letter to FBI Director Christopher Wray last month.

"Conclusion first, fact-gathering second—that’s no way to run an investigation.  The FBI should be held to a higher standard than that, especially in a matter of such great public interest and controversy," the letter continued. "It is unclear whether the FBI agents actually investigating the case were aware that Mr. Comey had already decided on the investigation’s outcome while their work was ongoing. However, it appears that the answer to that question may be underneath some of the extensive redactions that the Department made to the transcripts."

Shortly after this revelation, Graham said he "smelled a rat" and demanded Comey return to Capitol Hill to explain previous and conflicting testimony about the case.

“This doesn’t add up, and I smell a rat here,” Graham told Fox News. "He needs to come back to the Committee."

Savor the Democrats’ Humiliation
Townhall
THERE it is! Peter Doocy got Jen Psaki to admit what led to a crime surge in cities (ALL run by Dems)
Twitchy
Liz Cheney Gets a Big Signal That She's About to Get the Boot
Redstate
The Radical Left is Showing Liberals and Conservatives That We Can Be Friends Again
PJ Media