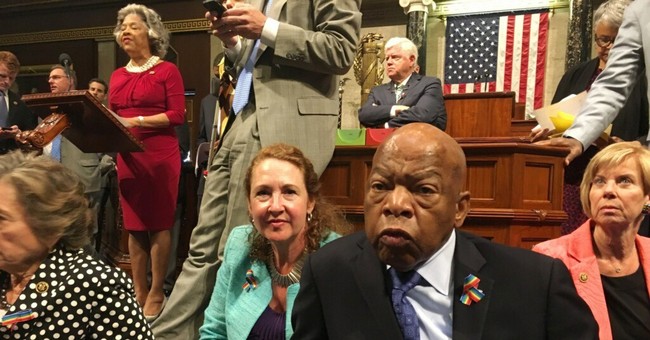 Preventing terrorists from purchasing firearms is something everybody can agree on, but how we get there is another story. Since the Orlando terror attack, Democrats have demanded anyone placed on the secret terror No-Fly or Watch lists be stripped of their ability to purchase a firearm. Over the past 24-hours, we've seen a sit-in with Democrats demanding, "No fly, no buy!"

As previously reported, the No-Fly list contains approximately 60,000 names. The Terror Watch list holds nearly one million. Many of the names on these lists, if not the majority, belong to people who have no ties to terrorism at all.

Four pieces of gun control legislation failed to pass earlier this week in the Senate. Today, an amendment from Republican Senator Susan Collins, which would allow those on the terror watch list to appeal to the government and receive reimbursement to attorney fees if they won their case, was also voted down due to a lack of protection for due process.

Currently, it can take years for an innocent individual to get off the list. Take for example Rahinah Ibrahim, an innocent Standford professor and PhD student who was improperly placed on the list. It took her eight years to get off.

In 2005, Rahinah Ibrahim, a Malaysian architecture professor and doctoral candidate at Stanford University, went to San Francisco International Airport where she was told that she couldn't board an airplane.

Her name was on a government no-fly list of suspected terrorists.

The FBI ultimately acknowledged that she ended up on there because an agent investigating her had checked the wrong box on a form, said her attorney, Elizabeth Pipkin.

Chillingly, the U.S. Justice Department never disclosed why Ibrahim was being investigated in the first place.

Ibrahim became the first and only person to be removed from the no-fly list by the courts, but Pipkin said it took “eight years and $4 million of pro bono attorney work to accomplish that feat."

God forbid any innocent person placed on the list ever need to buy a gun to defend themselves...for years on end.

As the ACLU has repeatedly stated, using the No-Fly or Terror Watch lists to restrict constitutional freedoms is inappropriate, unconstitutional and wrong.