Reporters Diss Holder, Refuse to Meet Off the Record About Secret Monitoring 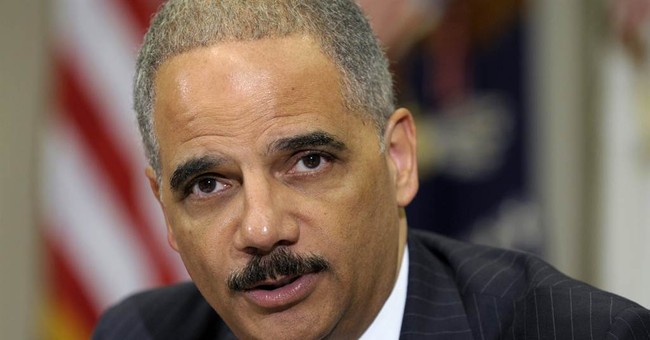 When you start messing with people who buy "ink by the barrel," things tend to happen. In the case of the Department of Justice secretly monitoring reporters, the press is finally a) doing their jobs by tracking down scandals in government b) is pretty ticked at Attorney General Eric Holder.

Last night, Holder offered to meet with reporters off the record to discuss the balance between national security and the First Amendment. In response, Holder received a thanks but no thanks from nearly every media outlet that was invited.

The Associated Press issued a statement Wednesday objecting to plans for the meetings to be off the record. "If it is not on the record, AP will not attend and instead will offer our views on how the regulations should be updated in an open letter," said Erin Madigan White, the AP's media relations manager.

The New York Times is taking the same position. "It isn't appropriate for us to attend an off-the-record meeting with the attorney general," executive editor Jill Abramson said in a statement.

Like the New York Times and the Associated Press, CNN will decline the invitation for an off-the-record meeting. A CNN spokesperson says if the meeting with the attorney general is on the record, CNN would plan to participate.

The Huffington Post's Washington bureau chief, Ryan Grim, also said he will not attend unless the meeting is on the record. "A conversation specifically about the freedom of the press should be an open one. We have a responsibility not to betray that," Grim told CNN.

But Politico posted an item on its website saying editor-in-chief John Harris plans to attend one of the meetings with Holder.

"As editor-in-chief, I routinely have off-the-record conversations with people who have questions or grievances about our coverage or our newsgathering practices," Harris said in the Politico item. "I feel anyone - whether an official or ordinary reader - should be able to have an unguarded conversation with someone in a position of accountability for a news organization when there is good reason."

A Justice Department official said Wednesday the sessions would be off the record to encourage a full exchange of ideas.

It seems that if Holder really wants to know how reporters feel about leaks and how DOJ handles them, he could just read reporters' emails and listen to their phone calls.

Putin to Biden: Finlandize Ukraine, or We Will
Townhall
Actor Rainn Wilson wants to know why those who refuse the vaccine are 'angriest' that the government hasn't fixed the problem
Twitchy
Jussie Smollett's Testimony About Don Lemon Shows What a Dumpster Fire CNN Is
Redstate
RUN AWAY! Democrats Fleeing Biden's Sinking Ship
PJ Media