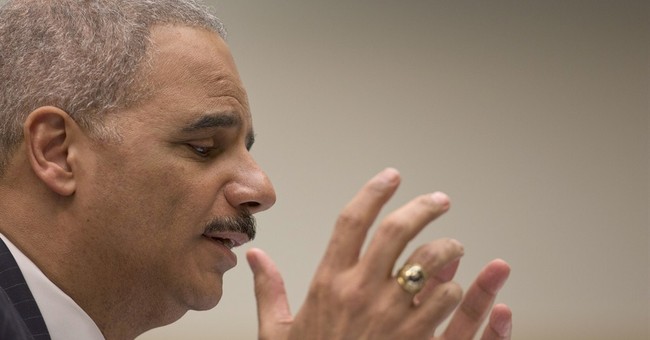 Apparently since he got caught secretly monitoring Fox News Chief Washington Correspondent James Rosen, something he wanted to do for years while accusing Rosen of a being a criminal co-conspirator, Attorney General Eric Holder is feeling some remorse.

For Attorney General Eric Holder, the gravity of the situation didn’t fully sink in until Monday morning when he read the Post’s front-page story, sitting at his kitchen table. Quoting from the affidavit, the story detailed how agents had tracked Rosen’s movements in and out of the State Department, perused his private emails, and traced the timing of his calls to the State Department security adviser suspected of leaking to him. Then the story, quoting the stark, clinical language of the affidavit, described Rosen as “at the very least ... an aider, abettor and/or co-conspirator” in the crime. Holder knew that Justice would be besieged by the twin leak probes; but, according to aides, he was also beginning to feel a creeping sense of personal remorse.

Well, isn't that nice. I mean, it's not like Holder personally signed off on monitoring Rosen's personal and work phones, personal and work emails, Fox News' work space at the White House and Pentagon and monitored the phone lines of Rosen's parents, or something. Oh wait:

So, is the guy really sorry? Probably not. His sense of regret only comes after calls from both conservatives and liberals, Republicans and Democrats, that he step down from his position or be fired. Not to mention being under fire for lying under oath about his involvement in secretly monitoring reporters.

In regard to potential prosecution of the press for the disclosure of material. This is not something I’ve ever been involved in, heard of, or would think would be wise policy.

Bottom line: Holder got caught and now he's trying to save himself and the White House.