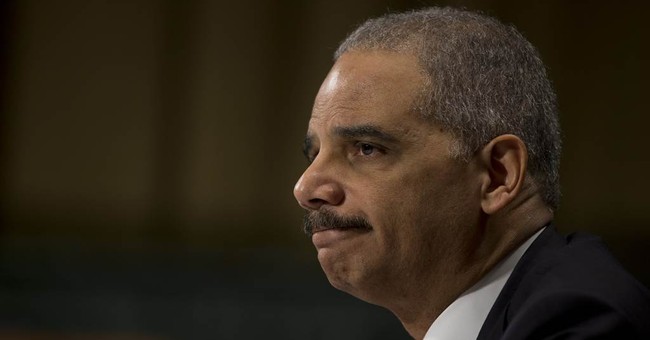 Yesterday during a press conference, Attorney General Eric Holder claimed he had recused himself from the Associated Press leak investigation case "early on," didn't have facts on the issue and that responsibility for the case lies with his Deputy Attorney General James Cole. During an interview with NPR, Holder said he "isn't sure" how many times the Department of Justice has secretly monitored information belonging to journalists in the past four years, all during which he has been the country's chief law enforcement officer.

As his Justice Department faces bipartisan outrage for , Attorney Gen. Eric Holder says he is not sure how many times such information has been seized by government investigators in the four years he's led Justice.

During an interview with NPR's Carrie Johnson on Tuesday, Holder was asked how often his department has obtained such records of journalists' work.

"I'm not sure how many of those cases ... I have actually signed off on," Holder said. "I take them very seriously. I know that I have refused to sign a few [and] pushed a few back for modifications."

On Morning Edition, Carrie added that Holder declined to say whether there will be a review of the Justice Department's policy on searches of reporters' records.

How is it that the Attorney General of the United States never knows anything important about anything controversial? Just yesterday Holder made it a point to stress that the AP leak was one of the most serious leaks he's ever seen in his career yet, recused himself from the case. You'd think if the leak was one of the most serious in history, the chief law enforcement officer and head of the Justice Department would lead the investigation into the case.

As Ed Morrissey points out, Holder's response indicates that the seizure and monitoring of reporters' communications is a normal thing over at DOJ.

Er … he’s refused to sign “a few” but isn’t sure how many he’s approved?  Presumably, the few modifications for which he “pushed” resulted in approval eventually.  That seems to strongly imply that this is a rather normal course of action at the Department of Justice — and for Holder. And note that Holder isn’t saying that he’s unclear about the operations within his executive purview, as Carney tried yesterday on Obama’s behalf — he’s unclear on how many times he himself has approved those seizures.

Holder is scheduled to testify before the House Judiciary Committee Wednesday at 1 p.m.