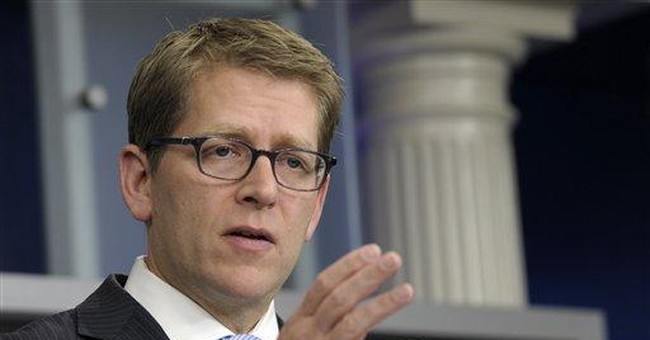 As details about the Department of Justice secretly monitoring phones lines of Associated Press reporters and the IRS inappropriately targeting tea party groups continue to emerge, White House Press Secretary Jay Carney tried to reassure reporters Tuesday afternoon that President Obama is committed to protecting the First Amendment while refusing to comment about details of both cases.

Throughout his remarks, Carney stressed the importance of First Amendment and national security balance. It should be noted the Obama administration has prosecuted twice as many 'leakers' than all other administrations combined. Carney repeatedly referred questions to the Department of Justice for information about the phone tapping.

"It would be wholly inappropriate for President to involve himself in a criminal investigation," Carney said in response to a question about whether President Obama has called Attorney General Eric Holder about the AP scandal. "The President is committed to the press' ability to pursue information and protecting the First Amendment.....he is also mindful of secret and classified information needing to stay secret and classified for national security reasons "

Carney also said the only information the White House receives about ongoing investigations within the Department of Justice, including the AP phone tapping, "comes only from press reports."

On the IRS inappropriately targeting conservative and tea party groups, Carney had little comment and repeatedly referred to a coming inspector general report on the matter. Carney also said he's confident nobody in the Obama administration or on the Obama campaign team was involved in any of these scandals, yet went out of his way to state the White House still doesn't have 'all of the facts.' Carney refused to say whether the President believes IRS officials should be fired over inappropriate targeting.

"We cannot and should not prejudge the outcome of a situation before we know what the facts are," Carney said. "We don't want to appropriate consequences [before we know all of the facts]."

Carney continued to say "if" the IRS in fact targeting conservative groups, it would be inappropriate. IRS official Lois Lerner admitted last week that inappropriate targeting in fact took place.

When asked about the recent comparisons of President Obama to Richard Nixon, Carney said, "People who make those comparisons need to check their history."