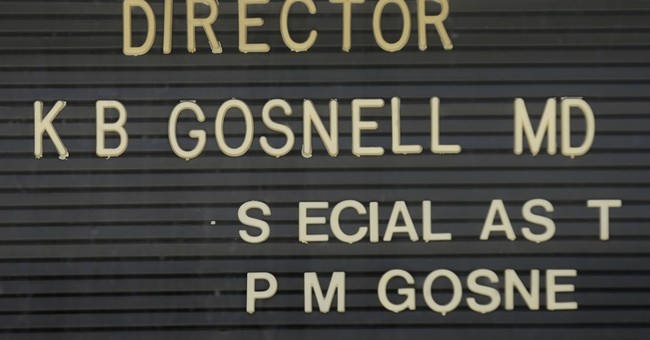 Baby Boy A was the biggest baby that Kareema Cross had ever seen delivered at Gosnell’s abortion “House of Horrors” clinic in the four years she worked there. He was delivered to 17-year old Shaquana Abrams at 29.4 weeks gestation, according to an ultrasound record. Baby Boy A was so large, he did not fit into the plastic shoe box that Gosnell tossed him in. Cross said she saw the baby pull in his arms and legs while Gosnell explained the movements as “reflexes” telling her the baby really didn’t move prior to cutting the baby’s neck. Baby Boy A was so large, Gosnell joked that “this baby is big enough to walk around with me or walk me to the bus stop.” Cross and fellow employees Adrienne Moton and 15-year old Ashley Baldwin were all so “startled” by the size of the baby that they all took photos of the baby with their cell phones.

Baby C was an intact baby of over 25-weeks gestation. Kareema Cross testified that she saw Baby C breathing and described the up and down chest movements she observed for 20 minutes. She told the court she saw Lynda Williams lift the baby’s arm and watched as the newborn drew it back on its own power. Afterwards, Williams inserted surgical scissors into the baby’s neck and “snipped” the spinal cord. Gosnell was said to be in the room at the time. This baby’s murder charges were unintentionally dismissed in the place of Baby F, but were reinstated after Judge Minehart discovered his error.

Baby D was described by witnesses as 12-15 inches long with the head the size of a “big pancake” when he was delivered into a toilet. Kareema Cross testified that she saw the baby struggling, using swimming motions in an attempt to get out of the toilet bowl. Adrienne Moton pulled the baby out and “snipped” the neck, as Gosnell had taught her to do, while the mother watched. Gosnell has also been charged with Criminal Solicitation of Moton to commit murder of Baby D.

Baby E was estimated to be at least 23 weeks gestation and maybe more. After Baby E was delivered, teen Ashley Baldwin heard the baby cry and called Kareema Cross for help. Cross described the baby’s cry as a “whine.” Baldwin said that Gosnell when into the room then came out with the baby — which now had an incision in its neck — and tossed it into the waste bin.

We are still waiting to hear the verdict for the charge of third degree murder.

He also faces a third-degree murder charge related to the death of a woman, Karnamaya Mongar, 41, of Virginia, from a botched legal abortion. Gosnell, who has been in jail since his January 2011 arrest.

And the other charges.

The abortionist faces 258 counts total and other charges against him include one count of infanticide and one of racketeering, 24 counts of performing third-trimester abortions and 227 counts of failing to follow the 24-hour waiting period law before an abortion so women can consider its risks and alternatives.

Students for Life of America President Kristan Hawkins has released a statement:

"There are no victories here and this is far from over. The women and children Gosnell killed are still dead. The families he destroyed with his lies are still suffering. Abortion is still legal in America and is being perpetrated in the same corrupt and dirty ways Gosnell did it for 40 years. Our generation has only just begun our quest to obtain justice for the 55+ million baby girls and baby boys who have killed by legal abortion and to save untold millions more from the same fate," Hawkins said. "Gosnell's filthy practices are simply business as usual for the abortion industry and its Goliath, Planned Parenthood. We know there are other Gosnells out there. It's time to expose these front alley butchers."

The pro-life Susan B. Anthony list isn't celebrating and reminds everyone that Gosnell is not alone.

“The greatest tragedy is that Kermit Gosnell is not alone. Exploitation of women and complete disregard for their health and well-being are problems endemic to the entire abortion industry,” said SBA List President Marjorie Dannenfelser in a statement. “There are numerous examples of negligence and even death in abortion facilities across the country. Now is the moment to realize that abortion is neither safe, nor rare. Abortion is a brutal, painful procedure, both for the child that it kills and the woman that it wounds. We must protect children both inside and outside the womb who experience unspeakable pain from abortion. Congress must address its role in protecting nationwide the human rights of children. Legislation to ban late-term abortions in the nation’s capital, as well as the recent action taken to investigate abortion industry oversight across the country are the vital first steps. But Congress should not and must stop there. The few inches that separate a child in the womb from a child outside the womb should never determine whether its intentional ‘demise’ is permitted by law or whether a ‘right’ to kill it no longer exists.  Americans overwhelmingly oppose late-term abortions and the law should follow their instinctive resistance to this dehumanizing and degrading practice.”

The sentencing portion of the Gosnell trial will take place next week.

UPDATE (GB) - The immediate, emotional reactions from the prosecution and defense tables:


UPDATE III (GB) - Surprise: Planned Parenthood weighs in with a sanitized tweet that doesn't mention Gosnell's younger victims.  Planned Parenthood of Pennsylvania was aware of the horror shop Gosnell was running and did nothing.  The abortion lobby has consistently opposed efforts to increase regulation, health inspections and oversight at abortion clinics.


#Gosnell was also found guilty of involuntary manslaughter in the death of patient Karnamaya Mongar, who died of an overdose of sedatives.

The abortionist #Gosnell also guilty of infanticide in death of Baby A, and conspiracy in deaths of babies C and D.

#Gosnell also found guilty on most of the more than 200 counts of Pa.'s "informed consent" law requiring a 24-hour wait.


Gosnell is eligible for the death penalty.  The sentencing phase of the trial begins in July, according to NBC News.


UPDATE V - The one murder count Gosnell skated on:


#Gosnell found not guilty in death of Baby E, who was heard emitting a single baby sound before neck was cut.


They couldn't definitively prove that this child was slaughtered outside of the womb, so "not guilty" it is, under our barbaric laws.  Many forms of late-term abortion remain legal in the United States, thanks to the obsessive efforts of the abortion lobby, and in the face of widespread public opposition:

Some in the media are still referring to the murdered babies in this case as "fetuses."