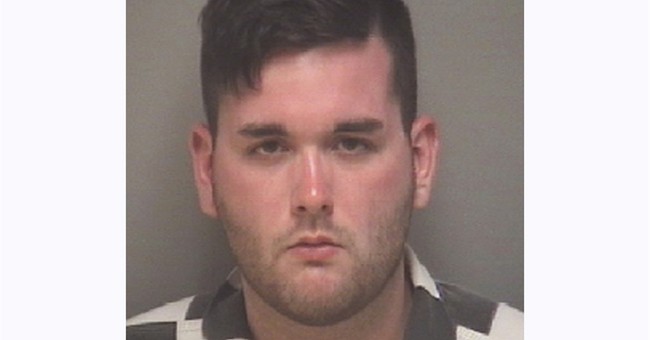 James Alex Fields, Jr., a 20-year-old from Maumee, Ohio, has been arrested in connection with the vehicle attack that killed one woman Saturday in Charlottesville, Virginia and injured 19 others.

He is being held without bail, charged with second degree murder, malicious wounding and failure to stop at the scene of an accident that resulted in a death. In addition, as Katiereported, Attorney General Jeff Sessions announced Saturday night that the FBI and the US Attorney's office in Virginia have launched a civil rights investigation.

The New York Daily News photographed Fields with the Vanguard America white nationalist group in the hours before the crash. He was holding the group's shield and wearing the same tan pants and white polo shirts as the others in the photo.

Vanguard America, whose web address is "bloodandsoil.org," claims Fields is not a member and that they handed the shields out to anyone who wanted them Saturday.

Fields' Facebook page (which has now been deactivated) featured a photo of him standing next to his Charger, along with Pepe the frog photos, a baby picture of Hitler, and the character Algernop Krieger from "Archer." The Krieger character was raised by Nazis in Brazil and is called a clone of Hitler by one of the show's main characters.

A reporter from the Toledo Blade spoke to Samantha Bloom, Fields' mother, Saturday night, informing her of the incident and that her son was the suspect in custody. Bloom, visibly shaken, said she knew Fields was going to a rally but didn't know anything about it being connected with white nationalism.

According to reports, Fields lives in an apartment in Maumee with a woman in a wheelchair. He was raised in Florence, Kentucky but both he and his mother moved to the Toledo area about a year ago.