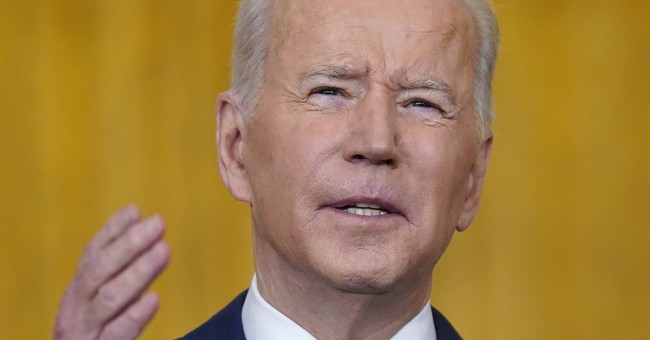 President Biden gave a rare formal press conference Wednesday afternoon, speaking and fielding questions for nearly two hours.  Amid the many words spoken, including some quasi-incomprehensible digressions, I tend to agree that few will be remembered.  Sure, the chattering class may discuss the president's concession that 'Build Back Better' will need to be chopped up into smaller pieces for any chance of a la carte passage for awhile, as well as his churlish and incoherent insistence that his nasty 'Bull Connor' smears last week didn't really mean what he clearly said.  But a handful statements from Biden will be more lasting, in my view, and not for good reasons:

(1) Damaging to foreign policy. Biden appeared to be gaming out Vladimir Putin's potential actions vis-a-vis Ukraine live on national television, at one point playing pundit in his guess that Russia will ultimately invade Ukraine.  He was playing the role of observer, rather than acting as President of the United States, the most powerful shaper of events on earth.  Biden effectively admitted that NATO allies are not quite as fully united as the US would like, signaling disunity to Putin, an acute detector and exploiter of weakness.  Most astoundingly, Biden mused that perhaps a "minor incursion" into Ukraine's sovereign territory would elicit a less severe anti-Kremlin reaction from the West.  Foreign policy wonks were mortified, and administration officials started the clean-up in real time.  But those words were uttered and are undoubtedly reverberating in Moscow, as they are in Kiev.  We don't know how this will play out, but the president undermined the appearance of Western solidarity and almost seemed to invite Putin to stage a smaller-scale invasion.  "Clarifications" will not erase this reaction:

A Ukrainian official told CNN's Matthew Chance that he is "shocked that the US President Biden would distinguish between incursion and invasion."

"This gives the green light to Putin to enter Ukraine at his pleasure," the official said. "Kyiv is stunned."https://t.co/zj22MovJp4

(2) Damaging to our polity.  We already have a delegitimization problem in this country, with hardcore partisans on both sides refusing to accept undesirable political outcomes.  Yes, this is very much a 'both sides' issue in our modern era, but until yesterday, only a Republican president had aggressively undermined public faith in the legitimacy of free and fair American elections.  Now his Democratic successor has done so as well, questioning election results in 2022 and beyond if his party's dead-end, one-sided, deeply harmful and destabilizing "voting rights" power grab does not become law.  It's a form of blackmail (do this radical partisan thing I want, or maybe elections will die), and it's extremely disturbing coming from any president.  It very much sounded like Biden was sowing the seeds of doubt on likely Republican gains later this year.  Democrats have spent more than a year freaking out about a sitting (then former) president refusing to accept results he didn't like.  Now their guy -- elected as the antidote to Trump turbulence and drama -- is dipping is toe into the same dangerous waters.  Given a change for a mulligan, he doubled down on his own special, preemptive version of the Big Lie, which is now bipartisan. Congrats, Joe -- and Kamala:

This second attempt from Biden on whether the election will be legit is even worse.

"Oh, yeah, I think it could easily be illegitimate ... The increase in the prospect of being illegitimate is in proportion to not being able to get these reforms passed." pic.twitter.com/nCyuAWSMXm

Vice President Harris replied: “Let’s get these bills passed before we have that conversation." pic.twitter.com/Rlml6vXY70

(3) Damaging to Democrats.  Asked if he'd 'over-promised' to the American people, based on his results, Biden insisted quite the opposite is true: Au contraire, I've actually out-performed all expectations, he said.  This man's job approval rating is hovering around 40 percent.  He said he's eager to have voters judge his economic performance; his approval numbers on that issue set are even worse.  Asked if he'd change direction in 2022, he mumbled something about getting out of the house more and stumping for Democrats all across the country.  Will they want him to?  None of that is likely to assuage the concerns of panicky Democrats who see a freight train barreling down on the party, with little guidance or relief from the White House:

In three dozen exclusive interviews with CNN, top Democratic politicians, campaign officials and operatives say the White House political operation is heading into the midterms unprepared and unresponsive even to basic requests for help or information...Democratic leaders have significant concerns with the White House's approach to getting the President to break through. It's not just that Biden's approval ratings have?tumbled. Those in charge of keeping Democrats in power doubt that Biden's team understands how to improve his political fate -- and with it, theirs...Senior Democrats, including some White House aides, describe a West Wing lacking both a political strategy and the discipline to execute one.

Focus groups are giving party operatives nightmares. Biden is coming across as old and absent, they say. Real and perceived fumbles play into deep fears that he's not up to the job and that Democrats are incompetent. Few Americans can say what was in the massive bills he's signed, though many have heard about Democratic infighting and failure in what he hasn't signed...?Though most Democrats in power believe there's still ample time for a turnaround, several top operatives are already talking triage. They're fearful of discussing all of this publicly because they don't want to create more problems. But privately, they are petrified that a Republican majority would end Biden's agenda and swamp them with endless investigations and subpoenas...

But the line that really stood out to me yesterday was part of Biden's response to a very simply question from Fox's Peter Doocy: Why are you dragging the country so far left?  Biden denied it, of course, but in doing so, he tried to illustrate his point by noting how the Senators in his party have been almost unanimous in support of his entire agenda.  Skip to the 1:10 mark of this exchange.  He thinks he's proving his point.  He's handing Republicans a hammer:

"Notice: 48 of the 50 Democrats supported me in the Senate on virtually every thing I've asked."

He's attempting to say that aside from Manchin and Sinema, he's in line with the mainstream of his party. What Republican candidates and ad-makers in key Senate races heard him say was, "these Democratic Senators always do whatever I tell them to do."  They can snip this statement and use it as a powerful attack linking vulnerable Democrats to an unpopular president. Usually these sort of ads say 'so-and-so votes with [fill in the blank -- Trump/Pelosi/Obama] 90 percent of the time,' or whatever the number is. That commercial gets more potent with Biden bragging that he's doing a great job (voters, especially in non-deep blue states, strongly disagree) then boasting that their local Senator is a totally reliable blank check for Biden's entire agenda -- according to Biden himself. Clip and save, NRSC. That sound byte could prove quite useful in the coming months.  I'll leave you with these numbers out of Pennsylvania, widely thought to be Democrats' best pick-up shot in the Senate this cycle: