Hillary: Muslims 'Have Nothing Whatsoever To Do With Terrorism' 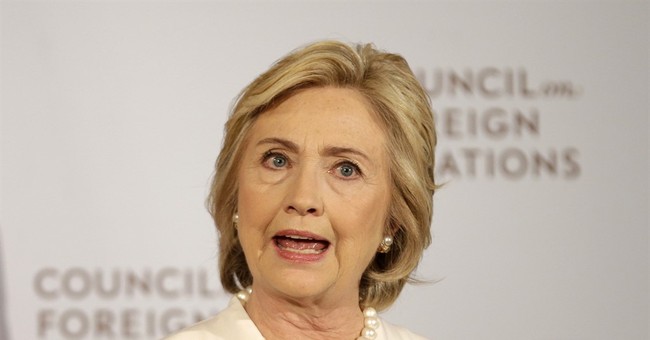 Behold, the woman who shall soon be crowned Queen of the endlessly self-righteous and self-congratulatory "Reality Based Community:"

"Let’s be clear: Islam is not our adversary. Muslims are peaceful and tolerant people and have nothing whatsoever to do with terrorism."


This is pure claptrap.  Everyone understands that the West is not at war with Islam broadly, and that an overwhelming percentage of Muslims reject violent extremism.  It's been beaten into our heads by politicians of all stripes since 9/11, and we're generally bright enough to draw the relevant distinction: "These Muslims over here are just peaceful, faithful people living their lives, whereas those Muslims over there are radical and seek to impose a toxic strain of their faith via terror and violence. We have no quarrel with the former group, which thankfully represents the large majority; the latter group must be confronted and defeated."  This dynamic isn't hard.  It can be quickly and easily explained, yet we are constantly bombarded with dumb, sanitized denialism like Hillary's second sentence above. Instead of treating us like adults, we're infantilized.  And to what end?  Muslims are peaceful and tolerant, we're instructed, and they have nothing whatsoever to do with terrorism.  This last bit is insultingly preposterous.  Some Muslims have quite a lot to do with terrorism, actually.  Like the ones who were led by their hardcore theology to kill 3,000 people on 9/11.  Or blow up trains in Spain.  Or target London's public transit system with bombs.  Or slaughter students at a Kenyan university.  Or Devastate a nightclub in Indonesia.  Or shoot up a shopping mall in Nairobi.  Or lay siege to a hotel in Mumbai.  Or terrorize Nigerian schoolgirls. Or, you know, take hostages in Mali. I could go on for some time.  But those aren't real Muslims, our Thought Leaders inform us.  Islamists loudly beg to differ -- and wouldn't they know a lot more about their motives and religious teachings than Western purveyors of bumper sticker feel-goodery? Try this: Ask someone who's convinced jihadists shouldn't be considered Muslims whether or not Osama bin Laden's corpse should have been discarded with no regard for Islamic traditions.  Or whether the terrorists at Gitmo should be deprived of prayer mats, or Halal meals, or Korans.  Maybe some enterprising reporter will ask Hillary these questions someday.  In any case, the "nothing to do with terrorism" line is plainly nonsense.  The more difficult part is the "peaceful and tolerant" phrase.  It's absolutely true that a huge preponderance of Muslims worldwide abhor and reject religious violence.  But as I explored in a piece after the Charlie Hebdo massacre, there is a worrisomely sizable strain of abject illiberalism that runs through mainstream Islam. Data from Pew, a respected global pollster, gathered two years ago:

Shall we count the 86 percent of Egyptian Muslims, or 62 percent of Malaysian Muslims, or the 17 percent of Turkish Muslims who believe leaving Islam is punishable by death among the "tolerant"?  Do the millions of Muslims who express support for suicide bombings against civilians "in defense of Islam" qualify as "peaceful"?   Or mustn't we ask such questions when there's a vapid slogan to be spouted, or a politically-correct tweet to be disseminated?   The concern, of course, is that leaders who are unable or unwilling to comprehend and properly identify a threat will be ineffective in neutralizing it.  Hillary's defenders will say that President Bush also refrained from directly naming the enemy.  True, but the current administration of which Mrs. Clinton was a part has taken euphemism-deployment to another level.  More disconcerting is the increasing evidence that Barack Obama and Hillary Clinton have no earthy idea how to achieve victory over threats that gravely imperil America and her interests.  Consider this anti-ISIS  "plan" touted by Clinton's campaign chairman:

Step one in Hillary's plan to defeat ISIS is: "Defeat ISIS." It's even got a check mark next to it. Say, what would happen if ISIS launched a successful terrorist attack on US soil, as they clearly want and intend to do? Would she deploy American forces to fight them on the ground in Iraq and Syria (just where her "plan" calls for them to be "defeated")?  Apparently not:


So even if ISIS infiltrated the United States and carried off a sophisticated, deadly attack, it would be a "mistake" to send American soldiers to go fight them.  This from the woman who voted yes on Afghanistan and Iraq.  If that's the case, at what point and for what reason would "boots on the ground" be justified, anywhere in the world?  Her political answer, for the moment, appears to be 'never.'  She does have a Democratic primary to win, after all, and the electorate is still war weary (although less so than she may suspect; our would-be Commander in Chief's answer may change once she sees more polling).  But wait, didn't she just endorse American boots on the ground against ISIS, in an abrupt about-face from her recently-stated opposition?  Why yes, she did -- when Obama left her no choice.  To recap, this woman -- whose plan to defeat ISIS entails "defeating ISIS" -- is against boots on the ground to, uh, defeat ISIS, even in response to a catastrophic terrorist attack in America.  Except actually she's for some boots on the ground, just not a lot of them, even though she was against those, too, just a little while ago.  And what she really wants you to know is that Muslims had "nothing whatsoever to do with terrorism." I'm Hillary Clinton. I engineered Obama's foreign policy. Now make me president.