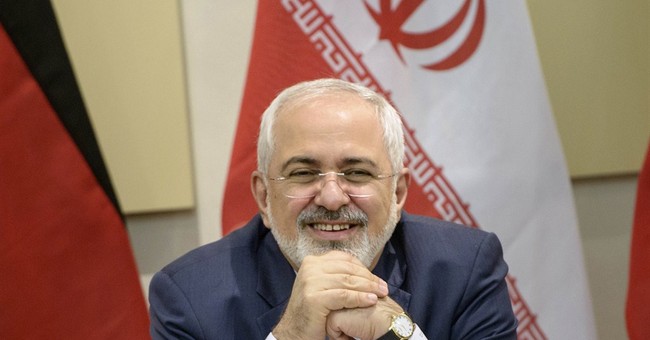 The 'P5+1' nuclear negotiations with Iran are coming down to the wire, with the Obama administration hellbent on attaining a deal before tomorrow's deadline (which Iran doesn't acknowledge, by the way). As Conn has reported, if an agreement is reached, it likely won't be formalized or written down for a period of months. What Western diplomats are scrambling to "achieve," therefore, is an informal consensus on the principles and outlines of a deal -- struck with an evil, untrustworthy regime. The British Foreign Minister told reporters last week that they're hoping to secure a "narrative," whatever that means:

We envisage being able to deliver a narrative. Whether that is written down or not, I don’t think is the crucial issue,” [British Foreign Minister Philip] Hammond told reporters at the British ambassador’s residence during a visit to Washington. “This will be a political statement, or perhaps political statements from the [negotiating partners] and Iran which create enough momentum to make it clear that we’ve now got this boulder over the hill and we are into the detailed work to produce an agreement.”… Iran’s Supreme Leader, Ayatollah Ali Khamenei, has said he sees no need for a written document describing an interim agreement in advance of the June 30 deadline for a comprehensive deal… “The challenge is: as soon as you write anything down, you’ve got to write everything down,” Hammond said.


Allahpundit notes that (a) Iran and the US have already been wrangling over the terms of the current interim agreement, and (b) just a few days prior to Hammond's comment, other Western diplomats assured the media that of course there was agreement that an oral deal with Iran -- i.e., a "narrative" -- wouldn't cut it, given their history and behavior on the world stage. Leon Panetta, former CIA chief and Obama-era Defense Secretary, agrees: "One thing I’ve learned both at the CIA and as Secretary of Defense is that the Iranians can't be trusted."  Perhaps because they do things like this at the eleventh hour, to exploit Western desperation to extract even more concessions:

With a negotiating deadline just two days away, Iranian officials on Sunday backed away from a critical element of a proposed nuclear agreement, saying they are no longer willing to ship their atomic fuel out of the country. For months, Iran tentatively agreed that it would send a large portion of its stockpile of uranium to Russia, where it would not be accessible for use in any future weapons program. But on Sunday Iran’s deputy foreign minister made a surprise comment to Iranian reporters, ruling out an agreement that involved giving up a stockpile that Iran has spent years and billions of dollars to amass. “The export of stocks of enriched uranium is not in our program, and we do not intend sending them abroad,” the official, Abbas Araqchi, told the Iranian media, according to Agence France-Presse. “There is no question of sending the stocks abroad.” Western officials confirmed that Iran was balking at shipping the fuel out, but insisted that there were other ways of dealing with the material. Chief among those options, they said, was blending it into a more diluted form.


So in addition to being able to maintain their rogue nuclear program's infrastructure, keep thousands of centrifuges spinning, do nothing to renounce or scale back their support for terrorism/regional power plays/human rights abuses, or give up their long-range missile program, Tehran has insisted that they also be allowed to keep their fortified underground enrichment bunkers in operation, and is now backing away from a previously-stated willingness to remove enriched uranium from the country.  (In addition to asking that sanctions relief begin immediately, based upon no evidence of compliance). The US and partners reportedly acceded to the former late-breaking demand, and are seeking ways to accommodate the latter. Remember that tough sanctions forced Iran to the bargaining table in the first place, with their economy in tatters. This deal would lift those sanctions -- with restrictions on the regime beginning to phase out after just ten years. The Obama administration has basically been lying to the public, repeatedly stating that no deal at all is preferable is a bad one. It's becoming entirely clear that they don't believe that to be true. They are frantic to reach an agreement that they can trot out as a historic Smart Power success, and the mullahs understand this. Short of firing missiles at Tel Aviv or New York, or formally stating their intention to build and use nuclear weapons, Iran knows that there's almost nothing they can say or do to drive the Americans away from the table. This is the textbook definition of a hopelessly weak negotiating position. And Team Obama has placed the United States in this mess because they're obsessed with a very strange notion of presidential legacies:

The official offered a hopeful note, adding that a nuclear deal with Iran — which some reports say could come as soon as Sunday — could be a turning point for the region. “The truth is, you can dwell on Yemen, or you can recognize that we’re one agreement away from a game-changing, legacy-setting nuclear accord on Iran that tackles what every one agrees is the biggest threat to the region,” the official said.


Pay no heed to the slow-motion implosion of our entire foreign policy posture; think about the magical, "legacy-setting" effects of an Iran deal. This unnamed State Department source is right about one thing: A terrible deal with Tehran would be a game-changer, just not in the way he or she thinks.  Arab powers in the region would move toward building nuclear programs of their own, the rift of distrust between the US and Israel would grow deeper, and some European allies would lose confidence in America's moral clarity and world leadership.  Meanwhile, Iran would get almost every single thing it wants, most especially keeping their nuclear program intact, but with the bonus of added international legitimacy.  The US might get a dubious promise to allow snap inspections, but most important of all, Barack Obama would get his way in the face of intense criticism.  And that's exactly how administration officials are trying to sell support for the deal to wary Democrats on Capitol Hill:


Ignore the merits. Ignore Iran's prior conduct and uniquely sinister role in world politics. Ignore the national security and geopolitical implications. Ignore Iran's ongoing "death to America" refrain. Focus on beating the Republicans. This is breathtakingly petty, partisan and reckless, even for them. Good Lord.