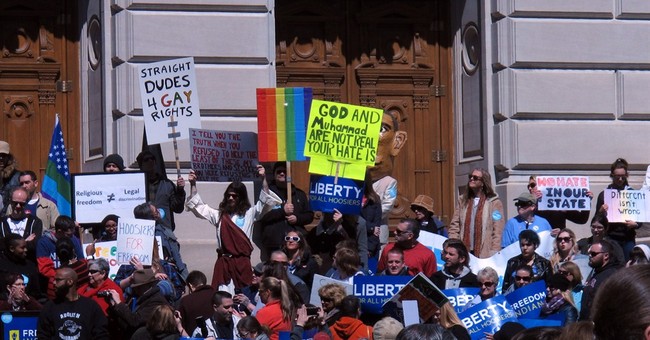 As you may have gathered via breathless headlines and hyperbolic social media rants, Indiana Governor Mike Pence recently signed into law a draconian attack on LGBT rights under the guise of "religious liberty." This unprecedented assault on equality, or whatever, has elicited strident condemnations and boycott threats from a number of celebrities and organizations.  Almost all of this hyperventilating is rooted in some brew of abject ignorance, mindless alarmism, and ostentatious moral preening.  The latter, anti-intellectual phenomenon is especially widespread: "Look at me, I'm a good person because I'm outraged about this terrible law, about which I know very little. Those who disagree with me are exposing themselves as bad people who support discrimination against gay people, which offends my tolerant and progressive sensibilities, of which I'm reminding everyone right now."

In fact, Indiana's Religious Freedom Restoration Act (RFRA) very closely mirrors a federal law cosponsored by Congressional liberals and signed by President Clinton in the early 1990s.  It is also extremely similar to laws enacted in 19 other states over recent decades.  That list of red and blue states includes Illinois, where then-state Senator Barack Obama cast his vote in favor of the legislation, which may help explain why some Democrats are struggling to logically defend their table-pounding over Indiana's law.  In short, the Hoosier State's RFRA isn't remarkable or radical under any fair reading. In a must-read piece today, writer and attorney Gabriel Malor (who is a gay conservative who supports same-sex marriage) sticks to facts in addressing common misconceptions about these laws -- starting with what they are, and the two-pronged balancing test at their core:

This legislation sets the same minimum standard for burdening the exercise of religion. Under the various RFRAs, a state or the federal government—by law or other action—may not substantially burden an individual’s exercise of religion unless the burden is in furtherance of a compelling government interest and is the least restrictive means of furthering that interest. Twenty states, including Indiana, and the federal government have RFRAs.


This was the same test applied by the Supreme Court in its Hobby Lobby ruling on religious liberty and Obamacare's contraception mandate last year.  Malor answers a series of questions about Indiana's law, making clear that it does not codify discrimination whatsoever, nor does it even mention gays or same-sex marriage.  (Separately, Mollie Hemingway profiles a number of Americans whose rights have been protected by RFRA-style laws, including Muslims, Jews, Sikhs, Native Americans, and "spiritists" -- none of these cases pertained to gay rights in any way).  Critics of Indiana's measure largely ignore these cases, opting instead to invent hypothetical victims of anti-gay discrimination -- which is not "permitted" under RFRA. An example of the alarmism:

Could Indiana businesses soon be displaying "Straights Only" signs? http://t.co/xXRxCwNcTM

This big gay freak-out is purely notional. No RFRA has ever been used successfully to defend anti-gay discrimination, not in twenty years of RFRAs nationwide. Why Is Everyone So Mad about Indiana’s RFRA, Then? The fear is that it could be used to deny service to gay people in places of public accommodation like businesses and restaurants. But, as discussed above, no RFRA has ever been used that way before. Also, Indiana does not have a public accommodation law that protects against anti-gay discrimination, meaning there’s no state law in Indiana preventing anti-gay discrimination in businesses even before the state RFRA was enacted. Notably, despite the lack of such a law, nobody can point to any Indiana businesses that were discriminating against gays...It is entirely consistent to favor broad religious freedom protections and also favor gay rights. Many gays are religious, and so themselves benefit from religious freedom protections like RFRA. But even where gay Americans and religious Americans find themselves in conflict, there is ample room in communities to peaceably coexist. That’s the point of a RFRA. No side gets an automatic-victory card. The interests of all sides gets weighed.


So many important points packed into one pull quote: Indiana does not have a public accommodation law on the books that includes sexual orientation as a basis for anti-discrimination protection.  In other words, businesses discriminating against gay customers isn't illegal in the state at present, and yet it isn't happening.  On the other side of the coin, there are plenty of instances of florists, bakers, caterers, etc. getting sued and having their livelihoods threatened for declining to participate in a same-sex wedding.  Malor writes about peaceful coexistence, but that's not what many on the Left really want, even after years of advancing "live and let live" arguments in favor of marriage equality, assuring skeptics that such unions "won't effect you." This coercive shift is a major theme of the book Mary Katharine Ham and I have written, available now for pre-order.  In any case, Malor's distinction is crucial.  RFRAs do not grant blanket immunity for discriminatory behavior rooted in religious faith -- a photographer turning down a job at a gay wedding, for instance.  They simply create a framework in which competing rights and interests can be balanced on a case-by-case basis.  They provide a potential recourse for the party being sanctioned or sued, but no guarantee of victory.

As I've noted in the past, most Americans now favor gay marriage, and an overwhelming majority believe gay people should be treated fairly and with respect.  People are not okay with anti-gay discrimination or bigotry, but a substantial majority also believes that private businesses run by religious people should be able to opt out of actively participating in the weddings of same-sex couples.  These attitudes are not in conflict; indeed, they embrace the very definition of tolerance and coexistence.  RFRA-style laws help codify a specific platform from which people can assert their religious rights in the face of countervailing government interests or legal challenges.  One more big point: Some opponents of Indiana's law say that it's not quite the same as other RFRAs because it applies its protections to businesses (which adheres to SCOTUS' Hobby Lobby precedent), as well as to private lawsuits in which the government isn't directly involved.  A law professor writing at National Review Online points out that "four federal courts of appeals and the Obama Justice Department have all taken the position that RFRA can be used as a defense in private suits involving the enforcement of laws that substantially burden free exercise of religion."  Again, Indiana's law isn't some unprecedented, thinly-veiled effort to trample gay rights.  It's quite 'precedented,' actually -- and nearly identical measures have been in place across the country for decades without touching off an awful carnival of bigotry and discrimination.  The hysteria and absurdity of this whole "debate" was perhaps best encapsulated by Connecticut Governor Dan Malloy's self-righteous executive order banning official state travel to Indiana. Surprise:


Davis explains that assertion in greater detail here, later swatting aside red herring push-back from Lefties trying to excuse Malloy's embarrassing tantrum, and exposing a blatant lie the governor's office is now circulating in his defense.  I'll leave you with video of Bill Clinton signing the federal version of RFRA into law back in 1993.  If you skip ahead to the 14:15 mark, you might notice two liberal heroes standing behind him and smiling as he puts pen to paper.  The same hand-wringers who routinely complain about the Republican Party's supposed rightward lurch never seem to mention that the center of the Democratic Party has moved so far to the left that Hillary Clinton feels compelled to effectively denounce her own husband's law: