WH: We Haven't Changed the President's Schedule Amid Crises Because it Might Scare People 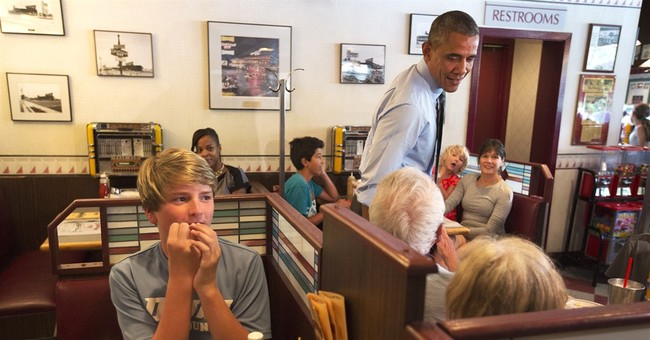 On Thursday, we chronicled President Obama's series of decisions to carry on with his public schedule -- a burger joint photo op, a partisan speech on infrastructure spending, and a pair of Manhattan fundraisers -- in the midst of two major international crises. First, Russian-backed and -armed separatists in Ukraine shot down a commercial airliner, killing nearly 300 innocent civilians, including one American. The attack marked a dramatic and lethal escalation of the war in Eastern Ukraine, in which Russia is a malignant and destructive actor. New evidence appears to indicate that Moscow has been highly interested in obtaining the flight's so-called 'black box' recording device, as Moscow-backed separatists restrict access to the crash site. The rebels say they'll turn that evidence over to the UN…at some point. Meanwhile, Israel launched a ground incursion into Gaza, a move that reportedly caught the White House by surprise. The conflict escalated over the weekend, as 13 IDF soldiers were killed by Hamas, and the Israeli military reports that heavily-armed terrorists entered its nation's territory wearing IDF uniforms -- allegedly with the intent of taking hostages. Pro-Hamas protesters are rioting and setting things on fire in Paris (we've already covered their proclivity toward anti-Semitic violence), and Turkey's "moderate" leader stated that Israel has "surpassed Hitler in barbarism" because of its anti-terrorist operations. And yet, the American president has chosen to forge ahead with run-of-the-mill, partisan activities, and is gearing up for a series of star-studded Hollywood fundraisers. The New York Times published a story over the weekend entitled, "Sticking to His Travel Plans, at Risk of Looking Bad -- Obama Maintains Schedule Despite World Crises." The problematic optics are readily apparent:


As smoke billowed from the downed Malaysian jetliner in the fields of eastern Ukraine on Thursday, President Obama pressed ahead with his schedule: a cheeseburger with fries at the Charcoal Pit in Delaware, a speech about infrastructure and two splashy fund-raisers in New York City. The potential for jarring split-screen imagery was clear. Reports of charred bodies and a ground-to-air missile attack from Eastern Europe dominated television screens while photographers snapped pictures of a grinning Mr. Obama holding a toddler at the restaurant. The presidential motorcade was later filmed pulling up to Trump Place Apartments, the Riverside Avenue venue for his first fund-raiser. And yet, White House aides said no consideration was given to abandoning the president’s long-planned schedule, even during the hourlong flight from Delaware to New York, when word suddenly arrived that Israel had begun a ground invasion of the Gaza Strip, providing the day’s second international challenge.


The White House's justification for its astounding public attitude nonchalance is the supposed desire to not worry the pretty little heads of the American people:

“It is rarely a good idea to return to the White House just for show, when the situation can be handled responsibly from the road,” said Jennifer Palmieri, the White House communications director. “Abrupt changes to his schedule can have the unintended consequence of unduly alarming the American people or creating a false sense of crisis.”


A false sense of crisis? Sure, the US isn't under imminent threat of an alien invasion, but the current crises are no less "false" than the recent spate of administration scandals are "phony." This entire explanation is insulting. I understand that this president's political team tends to hold the public's collective intelligence in rather low regard -- they've counted on it, in fact -- but this is beyond parody. With major and combustible geopolitical events playing out across the globe, the American people are mature enough to understand if Obama had taken his burger to go, while backing out of an unimportant speech and a couple of DNC fundraisers. Such actions wouldn't have touched off widespread panic across the country, Ms. Palmieri's excuses notwithstanding. Citizens would have intuitively internalized that the president's deviation from lesser responsibilities were necessary to handle the difficult job he was hired to do. (Also, shouldn't a Russia-aided terrorist attack and thousands of rockets being fired at our closest ally in the Middle East be alarming to the American people?) This president doesn't appear interested in the hard work of governing or leading in chaotic times. At least that's the impression he's left over and over again. That list, incidentally, is not even close to comprehensive, and was published prior to the events of the last week. Republicans' complaints may be predictable, but don't think our allies and adversaries alike aren't paying attention. President Obama's overwhelming priority seems to be raising money for his political party -- a task with which he's extremely familiar, and quite prolific:

On Thursday morning, President Obama is off to a party fundraiser in New York. Next week, he’s flying to the west coast for another fundraiser with the Hollywood glitterati. When Obama was in Denver last week, he attended no less than four cash-gathering events in the space of 24 hours. In his first term, Obama attended more fundraising events than any other president in recent history. According to author Brendan J. Doherty, from 2008 to 2012 Obama went to 321 events, compared to just 80 for Ronald Reagan. And, as the chart below shows, he’s done 72 events in his second term – 34 this year alone. So far, he’s ahead of the pace of George W. Bush, who had been to 30 events at this point in 2006. In his two presidential terms combined, Bush hosted 318 fundraisers. Obama has already smashed that number with 393 events to date.


Presidents are the de facto leaders of their parties, and fundraising is part of the job. Conservatives shouldn't try to argue that Barack Obama ought not hold these events on behalf of Democrats at all, or reflexively complain when he blows off some steam on the links (which he did again just yesterday, of course). But any American Commander-in-Chief should carefully weigh how his or her public actions and activities appear within a wider context. The Obama White House's pattern of tone deaf scheduling decisions in the middle of crises has been nothing short of astonishing. By the way, those who are most aggressively defending Obama's 'no big deal' posture over the last few days are largely the same group who will never forgive President Bush for taking a few minutes to finish reading The Pet Goat to a group of elementary school students after being informed of the 9/11 attack. I'll leave you with this clip of Fox News' Chris Wallace confronting John Kerry with a 'hot mic' video in which the Secretary of State appears to deride Israel's "pinpoint operation:"


Kerry's response wasn't too bad, considering the potential for embarrassment -- and at least he seems to possess some appropriate sense of urgency. Parting note: It's been reported that Hamas rockets were being stored in a UN-backed school (which apparently handed the weapons right back to Hamas), and that top terrorists have been using a hospital as their base of operations.


UPDATE - Several panelists on MSNBC's Morning Joe burst into laughter this morning over the White House's explanation (via Noah Rothman):