An Instantly Forgettable State of the Union Address 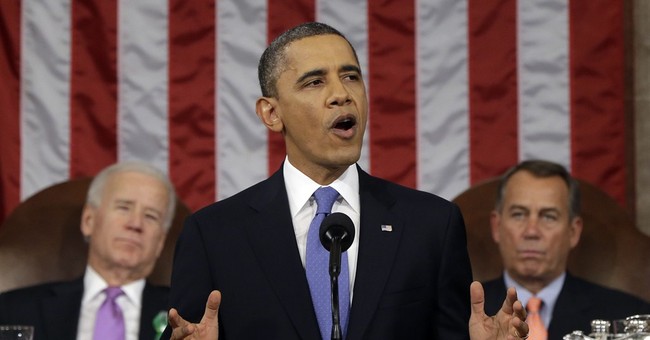 President Obama delivered an unremarkable speech tonight in which he advocated a number of small-ball initiatives, several of which were repeats from previous years. Virtually nothing in the address was memorable, with one significant exception. As he drew his remarks to a close, the president relayed the incredible story of an American wounded warrior, who was perched next to the First Lady in the House gallery. On a night of milquetoast policy and predictable rhetoric, this stirring tribute to a true hero broke through:


On his tenth deployment, Cory was nearly killed by a massive roadside bomb in Afghanistan. His comrades found him in a canal, face down, underwater, shrapnel in his brain. For months, he lay in a coma. The next time I met him, in the hospital, he couldn’t speak; he could barely move. Over the years, he’s endured dozens of surgeries and procedures, and hours of grueling rehab every day. Even now, Cory is still blind in one eye. He still struggles on his left side. But slowly, steadily, with the support of caregivers like his dad Craig, and the community around him, Cory has grown stronger. Day by day, he’s learned to speak again and stand again and walk again – and he’s working toward the day when he can serve his country again. “My recovery has not been easy,” he says. “Nothing in life that’s worth anything is easy.” Cory is here tonight. And like the Army he loves, like the America he serves, Sergeant First Class Cory Remsburg never gives up, and he does not quit.


This resilient Army Ranger's full story is here. God bless him. Now, onto politics -- and a few disjointed thoughts:


(1) The president asserted that the US economy is roaring back, a message that won't sit well with many Americans. The public has little confidence in the president or his party on handling economic matters. But after all the happy talk -- which ignored a terrible workforce participation rate -- Obama moved on to decrying income inequality. Obama sounded alternatingly triumphal and deeply dissatisfied with the state of the economy, creating a strange tension within his own speech.


(2) Obama pretended that Republicans are opposed to extending unemployment benefits to the long-term unemployed. Although economic evidence suggests that extended benefits reduce recipients' incentive to find and accept jobs, Republicans are open to re-upping them, so long as they're paid for. Obama also called on Congress to pass patent reform, which they've done. He called for expanded government pre-K programs, which gold-plated studies undertaken by his own administration have determined do not work. And like a broken record, he called for the closure of the Guantanamo Bay detention facility, home to some of the world's most dangerous terrorists:

Flashback: Obama’s 1st address to Congress in Feb 2009: “…I have ordered the closing of the detention center at Guantanamo Bay”

(3) More misleading posturing on equal pay for women. The president has already signed one piece of legislation that was supposed to "fix" that issue. He's touted it from that very podium. And the real cause of most of the pay gap he cited has little or nothing to do with discrimination or sexism. Oh, and his White House pays women less than men, which Katie pointed out earlier.


(4) The president defended his administration's nuclear deal with the Iranian regime, threatening to veto a widely-supported bipartisan sanctions bill that would apply pressure on Iran to follow through on a meaningful deal. His warning received very tepid applause. He claimed that Iran is now subject to vigorous inspections (false), and sung the praises of prior sanctions without mentioning that he fought those at the time, too. Remember this quote from Iran's Foreign Minister on the pact: "We did not agree to dismantle anything."


(5) On Obamacare, this president took another ridiculous victory lap. Without acknowledging the horrible roll-out, dropped coverage, or rising costs, he mocked the GOP for its dozens of repeal votes. Democrats got a kick out of this. Perhaps they've forgotten that eight of those silly partial repeal votes were signed by the president. Obama, as is his wont, used an anecdote of a woman who's benefitted from the new law. If it's an accurate story (several of his previous heart-strings tales haven't been), we should all be happy for her. The trouble is that millions of others are worse off because of the law, as its central promises have been broken. Democrats gave Obamacare a standing ovation tonight, including two very vulnerable Senators:


Although the basic premium remained the same this year at $104.90, it increased by $5 a month in 2013, up from $99.90 in 2012. Obama's health care law also raised Medicare premiums for upper-income beneficiaries, and both the president and Republicans have proposed to expand that. Finally, the degree to which the health care law improved Medicare finances is hotly debated. On paper, the program's giant trust fund for inpatient care gained more than a decade of solvency because of cuts to service providers required under the health law. But in practice those savings cannot simultaneously be used to expand coverage for the uninsured and shore up Medicare.


One dollar can't be spent at the same time on two different things. I'll leave you with the gif of the night, courtesy of Kathleen Sebelius. Her facial expression when the president began talking about the "Affordable" Care Act:

McMorris Rodgers passed "first do no harm" rule of SOTU responses with flying colors. Put a softer face on GOP opposition, to boot.


And yet, a host at MSNBC couldn't resist taking a demeaning shot:

Living room. Lady on a settee. Where's the needlepoint?