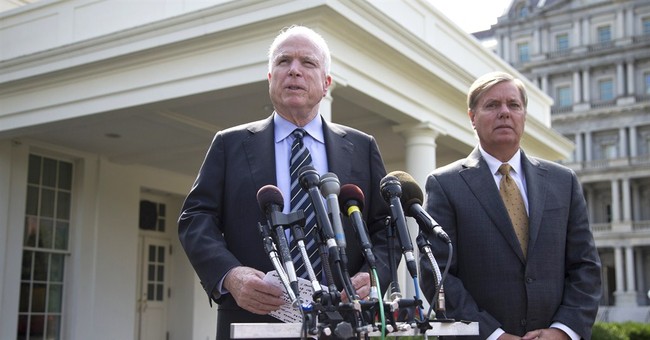 Dan wrote about John McCain's demurrals earlier, but I'd chalked that up to the Maverick trying to exploit his leverage to produce a more muscular resolution.  But might the party's super-hawks actually be preparing to vote 'no' on the administration's preferred resolution to authorize force?   Lindsey Graham spoke to the Washington Post's Jennifer Rubin, and sounds mighty concerned about the president's fecklessness and goal-lessness:

Sen. Lindsey Graham (R-S.C.) told Right Turn in a phone conversation this morning, “I’m not going to support a strategy that has zero chance of success.” Contrary to news reports, he told me that he and Sen. John McCain (R-Ariz.) aren’t yet sold on President Obama’s strategy for Syria. Without them, Graham said bluntly, there is little chance of a “yes” vote from Congress. “I don’t know if we can carry [the yes vote] over the finish line but I can assure defeat without us.” Graham is realistic about our current options. “This is not a yes or no question. It’s about bad and worse,” he observed. “Good and very good are in the rear view mirror.” Nevertheless, he warned, “I’ve got to be convinced there is a strategy.” Right now, the jury is out. For the first time I can recall, he said a hapless effort with no chance of success is “just as bad” as a “no” vote...I asked him what the chances of a yes vote were. “It’s a jump ball. People are persuadable,” he said of his colleagues. He warned that if the Democrats make the resolution narrower, as some are now promising to do, they will lose McCain and him.

Translation: If we're going to do something, let's really do something.  A superficial, ineffectual, face-saving "mission" won't cut it.  Based on their muddled and incoherent performances at yesterday's Senate hearings, Secretaries Kerry and Hagel left the distinct impression that the administration is flailing.  Kerry essentially argued that the administration's policy is regime change in Damascus, but that any American military action wouldn't be in pursuit of that end.  His on-the-fly "thinking out loud" expressions of hypothetical boots-the-ground scenarios -- which he repeatedly walked back -- lent an air of unpreparedness and confusion to the proceedings.  If Obama's men were there to persuade, they didn't do a very good job.  And it seems as though it'll take a lot to persuade most Americans that an intervention in Syria is a wise decision.  The president is in a bind:  Water down the resolution so much as to make it useless, and he risks losing the McCain/Graham faction.  Beef it up to the point that it has real teeth, and House Democrats may bolt.  The senior Senators from Arizona and South Carolina aren't the only national security-minded conservatives who are balking at the president's "strategy," such as it exists.  Allahpundit notes that Liz Cheney has also come out publicly against a strike, as has John Bolton.  Think about that.  Sen. Marco Rubio, who doesn't share the non-interventionist impuluses of fellow Tea Party freshman Sen. Rand Paul, appeared on Fox News' Special Report last night and sounded awfully reluctant to go along with the White House's plan:


Rubio doesn't see how lobbing a handful of missiles will serve as an effective deterrent.  If Assad is using chemical weapons against his own people as a means to cling to power (not to mention preserving his own life), will a symbolic American action really make him think twice next time he's boxed into a corner?  Rubio also makes the point that the best window of opportunity to affect the outcome in Syria with American interests in mind has closed.  Which brings me to another question: Kerry says that, contra his initial answer yesterday, the administration wants no part of "boots on the ground."  But the administration is also talking about stepping up assistance to the rebels -- but only the "good" ones.  Assuming they exist in any large numbers (and to some extent, they do), how can we assure that our weapons are getting to, and staying with, the moderate elements of the opposition.  In light of these disturbing developments and the strong jihadist strain that's infected many of the rebel elements, the US needs to be very precise in doling out powerful munitions.  Wouldn't that sort of precision require...some boots on the ground?

The conventional wisdom in DC has swung rapidly over the last 48 hours.  At first, the sense was that a 'yes' vote would be tough to secure.  Then after Boehner, Cantor, and Pelosi all came out in support of a strike, authorization seemed all but assured.  That outcome feels less certain today.  Conservatives are all over the map on this question.  Heritage Action and Andy McCarthy join the "no" ranks, while two House military veterans -- Mike Pompeo and Tom Cotton -- urge action.  The Senate Foreign Relations Committee is "marking up" the resolution this afternoon.  The particulars of the resulting document will seal its fate, one way or the other.  I can't imagine the pitiful spectacle of the president disclaiming his own red line and pawning it off on "the world" will do much to rally support.  The American people, and certainly the international community, remember this statement and the White House's sundry double-downs.  The latest attempt at history revision is totally unconvincing.  Obama looks like someone who's talked himself into a mess and has concluded that getting other people to share his mess is his least bad option.  Wishing the problem away for years hasn't worked.  Indecisive and unassertive fence-sitting doesn't wear well either.  It's possible that some members who are inclined to support military action in Syria might end up voting 'no' because they have little faith in a Commander-in-Chief who is displaying such poor leadership.


UPDATE - By the way, Hillary Clinton valiantly came out in favor of a Syria strike via an anonymous aide.  Clinton praised Bashir al-Assad as a "reformer" in 2011.  John Kerry, who's playing Colin Powell's role in selling this war, has called Assad a partner for peace.

UPDATE II - McCain and Rubio split over the committee resolution vote (McCain yes, Rubio no).  It passed 10-7-1, with Massachusetts' Ed Markey voting "present," perhaps as an homage to Barack Obama's State Senate career and Syria policy.  A vote in the full Senate is expected next week.