Clues and Questions About the Boston Bombings - UPDATE: Obama Plans Trip to Boston

ISTANBUL - I've just arrived in Turkey with a small delegation of American journalists, and many of our hushed conversations have been about yesterday's terrorist attacks in Boston, where twin bombings left three dead and wounded more than 170 -- with more than a dozen people still in critical condition.  As we've seen at home, Turkish television has been broadcasting now-familiar amateur video clips of the blasts on a virtual loop.  Anchors ask the ubiquitous question: "Who did this?"  More than 24 hours later, no group or individual has claimed responsibility for the bombings, and US authorities may be back at square one in unraveling the mystery.  Remember that mysterious Saudi national who was reportedly being guarded and questioned as a "person of interest"?  Perhaps there's a reason why police repeatedly declined to refer to him as a "suspect."  Early interest, no matter how keen, does not necessarily equate to guilt.  Cold trail?

Late Monday night, law enforcement officials descended on an apartment building in the suburb of Revere, about five miles north of Copley Square, linked to a man the police took into custody near the scene of the bombings. But on Tuesday morning, one law enforcement official said investigators had determined that the man, who was hurt in a blast and was questioned at the hospital, was not involved in the attack.


The New York Post has more on the initial behavior of the young man in question, which sends mixed signals:

The potential suspect told police he had dinner Sunday night near Boston’s Prudential Center, about half a mile from the blast site, the sources said. He also said that he went to the Copley Square area yesterday to witness the finish of the race. The sources said that, after the man was grabbed by police, he smelled of gunpowder and declared, “I thought there would be a second bomb.” He also asked: “Did anyone die?” Officials showed up at the Revere apartment at about 5:30 p.m. in unmarked vehicles, a resident of the building said. It’s on a street where the man had lived, law-enforcement sources told The Post. About an hour later, more vehicles, carrying agents of the FBI, Homeland Security and ATF also descended on the site, along with firefighters and a bomb squad. They searched an apartment on the fifth floor. By midnight, most of the authorities had left the complex, which sits on a piece of ocean-front property in the seaside city.


The Times describes that search as "fruitless," complicated further by the apparent innocence of the man's roommate.  If this person really does turn out to be uninvolved in the plot as the Times' source claims, the case gets even more curious.  Radical ideologues are generally eager to take credit for blows struck against their foes.  And this one is extremely high-profile.  The twin bombings killed Americans and wounded dozens; even if the attack wasn't carried off entirely as intended (there are ominous indications that the perpetrators might have had more carnage in mind), you'd think that radicals of any stripe would (a) want the world to know that they were the ones who pulled it off, and (b) air their demands or grievances via the breathless news media.  And yet, nothing so far.  Instead, we're left with scattered clues.  Kevin mentioned earlier that the Associated Press is reporting that the explosive devices were, in fact, packed with nails and ball-bearings, which are designed to wreak maximum damage on bystanders.  Also relevant is the fact that small pressure cookers were apparently the main delivery method of the home-made explosives, which were hidden inside duffel bags then left on the ground or dropped into public garbage cans.  The bombs could have been detonated by timers on the cookers themselves, or remotely via cell phone.  Allahpundit notes that Islamist terrorists have been exploited pressure cookers to "host" primitive bombs for years:

Terrorists have been using them for more than a decade, most frequently in Nepal, Afghanistan, India, and Pakistan. They were used in the 2006 Mumbai attack, and a very crude version was part of the car-bomb attempt in Times Square in 2010...Pressure cookers are ubiquitous over there so they don’t arouse suspicion. Al Qaeda’s Yemeni-based “magazine,” “Inspire,” has also recommended them to budding jihadists.


Does the thread from Afghanistan to Mumbai to Manhattan to "Inspire" implicate some offshoot of Al Qaeda, or another Islamist terror cell in the 4/15 explosions?  It's entirely plausible, if not likely -- but again, why hasn't anyone proudly released a triumphal credit-taking video?  It's not like these ghouls have any scruples or shame; some are said to have openly celebrated the atrocity -- dancing in the streets over the death of Martin Richard, age eight: 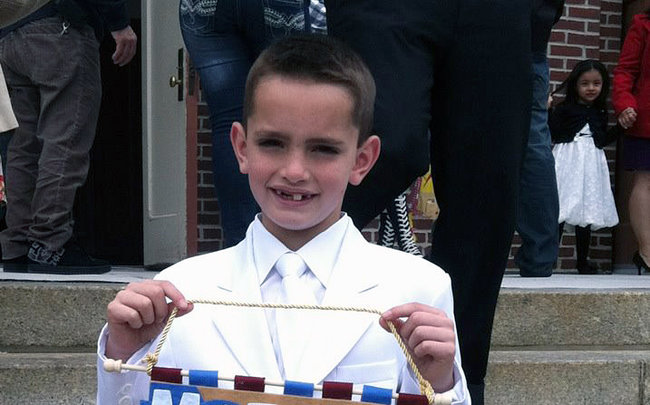 Monsters.  Investigators are piecing together the "how," but the "who" and "why" remain frustratingly elusive.

UPDATE I (Dan) - President Obama will visit Boston on Thursday:

The White House has confirmed President Obama's trip to Boston on Thursday. Per the administration's travel plans: "On Thursday morning, the President will travel to Boston to speak at an interfaith service dedicated to those who were gravely wounded or killed in Monday's bombing near the finish line of the Boston Marathon."

UPDATE II (Dan) - The second victim has been identified:

A 29-year-old restaurant manager has been identified as one of three people killed in the bombing at the Boston Marathon.

Her father says Krystle Campbell, of Medford, Mass., had gone with her best friend to take a picture of the friend's boyfriend crossing the finish line on Monday afternoon.

William Campbell says his daughter, who worked at Jimmy's Steakhouse in nearby Arlington, was "very caring, very loving person, and was daddy's little girl." He says the loss has devastated the family.

UDATE III (Dan) - The third victim has reportedly also been identified (although his/her name has not yet been publicly released):

One of the victims killed by blasts at the Boston Marathon on Monday has been identified as a Boston University graduate student. The student’s name has not been released, pending permission to do so from the family.

The student was one of three friends who watched the race near the finish line. Another of the three students, also a BU grad student, was injured and is in stable condition at Boston Medical Center.

UPDATE IV (Dan) - It seems as though the third victim was a Chinese national:

NEW YORK (AP) — The Chinese Consulate in New York says a Chinese national is the third person killed in the Boston marathon blasts.

An official at the consulate's press section, who was not authorized to give his name, said that one Chinese student was injured and another died in the blast.