What Are McCain and Graham Thinking?

Let's be honest: Everyone knows McGraham will never see eye-to-eye with Rand Paul on a host of national security issues, from the proper threshold for US military intervention, to the expansiveness of executive powers in wartime.  Indeed, when their respective camps square off on any number of questions, I often (though not always) find myself on Team McGraham.  But as Katie described earlier, McCain and Graham's sneering performance on the Senate floor today was maddening to witness.  Case in point, this dumb infographic: 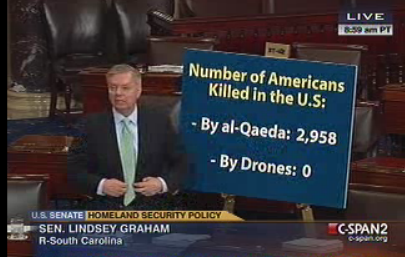 Spare us, Senator. You're better than this.  If either of these men had bothered to swing by the Senate last night to listen to just a few minutes of Rand Paul's 13-hour talk-a-thon, they might realize how badly they're misunderstanding his point.  Paul was not seriously discussing the threat of droning Jane Fonda.  And no one was contending that government drones have killed a single American on US soil -- in fact, Paul repeatedly asserted exactly the opposite.  Last night's filibuster was not about what has already occurred, or what Americans have to fear from this specific administration.  It was about precedent, principle, Constitutional authority, due process, oversight, and the separation of powers.  Here is the full text of the non-binding Senate resolution that Paul and his backers tried to advance yesterday, which Dick Durbin blocked last night and McGraham derided as "not helpful," and "paranoid," or whatever:

Resolved, that it is the sense of the Senate that:

1. The use of drones to execute, or to target, American citizens on American soil who pose no imminent threat clearly violates the Constitutional due process rights of citizens.


That's it.  How does that language not easily attract 100 votes in the United States Senate?  Like many conservatives, I am a supporter of the drone program, dating back to the Bush era (although I worry that it's overused these days, due to a lack of political will to capture and interrogate terrorists  -- and I'm also concerned about the expansion of so-called "signature strikes" and civilian casualties).  I also believe that some unconventional wiretapping programs and enhanced interrogation techniques are important, limited tools in the war against terrorism, that foreign terrorists should not be tried in federal courts, and that the Guantanamo Bay detention facility helps keep us safe.  On these issues, I'm largely on the same page as McCain and Graham, but for the life of me, I can't comprehend what "principle" they think they're defending by attacking and ridiculing Rand Paul for the questions he's raised.  Here's Marco Rubio late last night, expressing his astonishment at the White House's refusal to issue a straightforward response to what should be an easy question (for his bottom line, start around the three minute mark):


That's the point here, not hellfire missile strikes on cafes or domestic drone body counts.  (Major credit is also due to Senators Ted Cruz and Mike Lee, whose legal acumen was evident throughout the long session).  Some liberals are voicing their surprise that all these hours later, the president still hasn't put this issue to rest:


If you're still surprised by this administration's contempt for transparency, you haven't been paying attention.  Unfortunately, McCain and Graham have done their part to let Obama off the hook here.  The White House can remain tight-lipped, point at McCain, and shrug, "what he said."  Finally, aside from the important principles at stake in this debate, there's also a political element to all of this.  For the first time in months, I sensed a real unity of purpose on the Right last night.  Sen. Paul's filibuster engulfed Twitter (#StandWithRand trended worldwide), energized conservatives, and built palpable momentum. Republicans' messaging and timing has been abysmal for months, so it was refreshing to see a worthy fight being picked and managed deftly for once.  Phil Klein tries to put his finger on the somewhat intangible political subtext of last night's events:

A lot of the outpouring of conservative support for Paul’s filibuster on Obama’s drone policy went beyond the libertarian and anti-interventionist blocs of the movement who were also deeply troubled by Bush era counter-terrorism policies. Even those conservatives who may not agree with all of Paul’s views on presidential war powers were supportive if for no other reason than they relished seeing a conservative win a messaging war with Obama. It was impossible to dismiss this as just a right-wing Tea Party attack, because a lot of liberals agree with the substance of Paul’s criticism. This filibuster had to get under Obama’s skin. As much as anything else, he was elected on a promise to turn the page on the Bush era and conduct the war against terrorism with greater concern for civil liberties. Watching Paul’s filibuster last night, I couldn’t help but think that this is how Obama imagines himself – a principled crusader for justice. When Bush and Cheney were running the show, whatever could be said about them, at least they were consistent in supporting broad presidential powers in the realm of national security. But it’s hard to look back at the pre-2009 Obama and see him as anything other than an arrogant hypocrite now ... Republicans obviously have a long way to go. But taken together with the emerging sense that Obama overplayed his hand on the sequester, things are looking much brighter than they were in January.


Guys like McCain and Graham don't even have to agree with Rand Paul to recognize this political moment for what it is. They could have at least attempted to figure out a way to both some identify common ground and underscore policy differences without knee-capping Paul and undermining the support he's galvanized.  Instead, this tone-deaf nonsense. Poorly played, gentlemen.