I humbly proffer the ultimate companion piece to this morning's item, which quoted the President Obama expressing his irritation over John Boehner's incessant carping about some "government spending problem" the president is convinced doesn't really exist.  Ladies and gentlemen, it has indeed come to this:

Lawmakers are still positioning themselves for a debt ceiling fight in a few months, but one Republican congressman wants to snuff out a particular idea immediately: the U.S. Treasury minting $1 trillion platinum coins to avert a debt ceiling showdown. Rep. Greg Walden (R-Ore.) has introduced a bill to specifically ban President Barack Obama from minting the coins. “This scheme to mint trillion dollar platinum coins is absurd and dangerous, and would be laughable if the proponents weren’t so serious about it as a solution,” Walden said in a statement. “My bill will take the coin scheme off the table by disallowing the Treasury to mint platinum coins as a way to pay down the debt.”


When we first drew this nonsense to your attention early last month, it was merely a theoretical proposal being tossed about by fringe liberals and debated by academics.  It's gained momentum ever since, attracting support from a veteran Congressional Democrat, as well as respected-economist-turned-lefty-polemicist, Paul Krugman.  Here's a brief refresher on how this lunacy would work, including a special bonus quote from an economic "expert:"

Under this scenario, the U.S. Mint would produce (say) a pair of trillion-dollar platinum coins. The president orders the coins to be deposited at the Federal Reserve. The Fed then moves this money into Treasury’s accounts. And just like that, Treasury suddenly has an extra $2 trillion to pay off its obligations for the next two years — without needing to issue new debt. The ceiling is no longer an issue. “I like it,” says Joseph Gagnon of the Peterson Institute for International Economics. “There’s nothing that’s obviously economically problematic about it.” In theory, this is much like having the central bank print money. But, says Gagnon, the U.S. government would simply be using the money to keep spending at existing levels, so it wouldn’t create any extra inflation. And if it did cause problems, the Fed could always counteract the effects by winding down some of its other programs to inject money into the economy. Is the platinum coin option really legal? Apparently so. It was discussed* during the 2011 debt-ceiling crisis by Jack Balkin, a law professor at Yale Law School. Under law, he noted, there’s a limit to how much paper money the United States can circulate at any one time, and there are rules that limit how many gold, silver and copper coins the Treasury can mint. But there’s no such limit when it comes to platinum coins.


Good news!  It's perfectly legal and not "economically problematic" in any conceivable way.  Thank God for that handy platinum loophole, am I right?  Although I must say I prefer Allahpundit's cheeky suggestion that the Treasury "mint" magic beans to accomplish the same farcical trick.  And as I've asked previously, if engaging in monetary mysticism to avoid issuing new debt isn't a devastating economic risk (see: acute devaluation, a collapse of confidence in the bond market and Zimbabwe-style inflation), why not churn out 17 of these puppies and retire the entire debt in one fell swoop?  Hell, we'd have a surplus.  Imagine the "investments" we could make with with that surplus.  For the children.  Back to reality: Our official national debt is hurtling toward the $17 trillion mark.   Our more realistic national debt is closer to $90 trillion.  We've run trillion dollar deficits for four consecutive years, and next year won't be much better -- despite policies to tax "the rich" more and substantially wind down both wars.   Our spending and future obligations are unsustainable.

Unlike during the fiscal cliff battle, Republicans will have some real leverage to attempt to force Democrats to begin to deal with these facts over the next few months.  Rather than advancing solutions to curb short-term spending and corral long-term liabilities, liberals are talking about trillion dollar coins.  (Their other big idea is having Obama unilaterally declare the debt ceiling unconstitutional, then go on his merry way, forcing Republicans to sue.  This won't work, but it would create a new temporary crisis, wherein the US treasury would be split into two tranches: Pre-lawsuit real money, and post-lawsuit fake money.  Good times).  As a political matter, I'm all for Democrats talking up these two options.  In fact, I hope they speak louder.  The public is willing to tolerate a lot of Lefty silliness, obviously, but they do have a breaking point.  Americans recognize that we have a major debt problem, and numerous polls throughout the election cycle demonstrated that they trust Republicans more than Democrats to deal with it.  Democrats disqualify themselves as serious actors with this super-coin voodoo rubbish, and the concept of abolishing the debt limit was one of the least popular elements of Obama's surreal initial fiscal cliff proposal.  Republicans should maintain a united front about the revenue component being settled and turn the focus back to spending restraint -- then allow Democrats to pound the table about their various non-solutions, and stand firm.  Parting thought: If we descend into full madness and these coins are minted, what should they look like?  It's just has to be Obama's face, right? 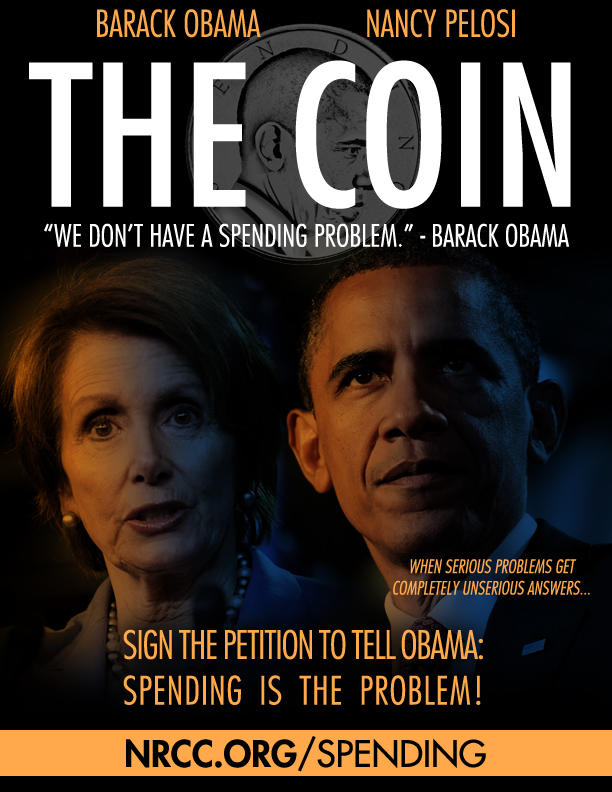 Tuesday marks the 1,350th day since the Senate passed a budget. The law requires Congress to pass a budget every year, on the grounds that Americans deserve to know how the government plans to spend the trillions of taxpayer dollars it collects, along with dollars it borrows at the taxpayers' expense. But Majority Leader Harry Reid, who last allowed a budget through the Senate in April 2009, has ignored the law since then. There's no mystery why. The budget passed by large Democratic majorities in the first months of the Obama administration had hugely elevated levels of spending in it. By not passing a new spending plan since, Reid has in effect made those levels the new budgetary baseline...The situation is deeply frustrating for many Republicans. Sen. Jeff Sessions, ranking Republican on the Senate Budget Committee, has conducted a virtual crusade on the issue, loudly and consistently and unsuccessfully demanding that Reid obey the law and pass a budget. Now, with a fight over the debt ceiling approaching, Sessions wants to try something new. "I think it should be a firm principle that we should not raise the debt ceiling until we have a plan on how the new borrowed money will be spent," Sessions told me Monday in a phone conversation from his home in Alabama. "If the government wants to borrow money so it can spend more, then the government ought to tell the Congress and the American people how they will spend it."