Live from Orlando: GOP Presidential Hopefuls to Square Off in Fox News Debate

Greetings from humid and soggy Orlando, Florida, where eight Republican Presidential candidates will square off in another televised debate.  Townhall will have full team coverage, so check back often.  To whet your appetites, let's discuss what's at stake for each candidate tonight:

Rick Perry - I've listed Perry first because he remains the GOP frontrunner according to virtually every national poll, although things have tightened with Mitt Romney a bit.  I think it's fair to say that Perry's performances in his first few debates have been a mixed bag.  He's shown a tendency to start off strong, focused, and feisty, then falter as the night wears on.  He's largely survived his first major clashes with Romney on Social Security, although might that issue burn him in senior-heavy Florida?  Not according to the latest Quinippiac poll (which, incidentally, contains some truly grisly numbers for President Obama.  Talking to a lot of Republican primary voters, I get the sense that a great many of them want to support Rick Perry for president, but they're waiting to see how he progresses in debates and on his feet in interviews.  Tonight is the latest test.  If he continues to show progress -- that's the key, I think -- he'll maintain his claim on the top spot.

Mitt Romney - The former Massachusetts Governor has had a pretty good week, as several major polls show him drawing closer to Perry both nationally and in states like South Carolina.  He also still leads by a country mile in his own backyard of New Hampshire.  Romney has largely escaped a brutal takedown on his Massachusetts healthcare program -- but how much longer can he flutter around that issue without sustaining a (deserved) body blow?  A new report out of the Bay State claims that Romneycare cost the state 18,000 jobs and increased healthcare costs dramatically.  Will another candidate finally score some major points on this, or will Romney again deflect with a slick prepared answer?  Overall, I suspect Romney just wants to maintain his current equilibrium.  These settings are his forte.  He hasn't misstepped badly in a debate yet.

Newt Gingrich - Newt?  Third?  According to the latest from Rasmussen, yes indeed.  Not a bad turnaround for a guy whose entire senior staff quit, and who spent much of his early campaign either on vacation or walking back his attack on Paul Ryan.  To his credit, Gingrich has shone in recent debates, uniting the field against Barack Obama and the mainstream media.  His answers have been partisan but smart -- vintage Newt.  Although he faded early in the cycle, more than a few Republicans have watched Newt in action over the last few debates and remembered why he was once the shining star of the party.  He's still in single-digits, but I suspect he'll gladly take it.  Being the good GOP cop has worked wonders for him, so I doubt he'll lead any charges to criticize anyone else on stage.

Michele Bachmann - She seemed to regain some of her momentum in Tampa last week, but then she put her foot in her mouth on Gardasil and has refused to apologize.  She's suffered a subsequent shellacking in the polls; the Weekly Standard describes her five percent support in a recent Gallup poll as an "implosion."  One of Bachmann's strengths is her unflinching focus on Obamacare and the threats it poses to our freedoms and our country's bottom line.  She is at her best when she's going after that policy in particular, and Republican voters respond very approvingly.  It's also been interesting to see her take the lead in some of the Perry pile-ons.  Yes, he's an existential threat to her appeal to the right, but by hammering away on him, she often seems to let Romney off the hook.  When she unloads on Perry -- and much of her pre-"retardation" Gardasil attack last Monday really did some damage -- Romney can barely contain his smile.  (By the way, I'd be relieved if we didn't hear a single word about Gardasil from anyone tonight -- although I suspect Chris Wallace might ask Bachmann about it).

Jon Hunstman - Good news!  Huntsman's campaign has been blasting out excited emails highlighting a poll that shows the former Utah Governor polling at...ten percent.  In New Hampshire.  Behind Romney and Ron Paul (but ahead of Rick Perry).  I think Huntsman did himself some good in his debate debut out in Simi Valley, CA, but he really fell flat at the Tea Party CNN gathering.  The sense I've heard from talking to folks is that he just seems to give off a superiority complex vibe that is unattractive to many voters, including some who might be open to supporting him.

Herman Cain - Viewers can always count on Cain for at least one or two fantastic one-liners during the course of the evening, as well as a schooling on on job growth and how businesses actually work.  His private sector experience shines through, as does his sense of humor.  I know some people think it's a waste of time having guys like Cain on stage at this point, but I think he livens up the atmosphere, and brings several helpful perspectives to the discussion.

Rick Santorum - Raise and defend traditional conservative social values, and beat back Ron Paul's foreign policy madness.  Those seem to be the two major roles Santorum has carved out for himself at these events.  We'll see if the trend continues.

Ron Paul - "Why would you consider putting Left-wing martian Dennis Kucinich in your cabinet?"  That's the question I hope some asks Rep. Paul tonight.  It would also be genuinely interesting to hear Paul's take on yesterday's action by the Fed.

Gary Johnson - The former New Mexico Governor performed terribly in the one and only GOP debate he's qualified for so far, so virtually anything will be an improvement.  His campaign's limited appeal is mostly geared primarily toward the libertarian wing of the party.  I suspect he and Santorum might end up at loggerheads on a few issues.


Here's a peek at the absolutely fantastic media filing center here in Orlando.  Google pulled out all the stops, including a smoothie and candy bar, and all sorts of sleek technological goodies.  This place feels more like a club than a workspace.  Focus, Guy. 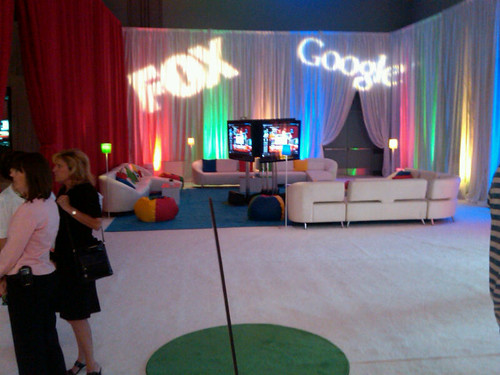 As usual, we'll have a live open thread posted during the debate.  It airs live on Fox News Channel at 9pm ET.  I'll write-up a winners and losers post after the event's conclusion.  See y'all then.