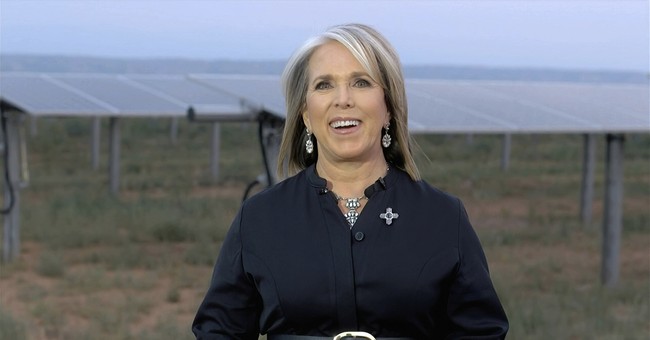 Democrat Gov. Michelle Lujan Grisham of New Mexico has quietly been trying to find a way to evade an energy proclamation by a potential Joe Biden administration.

Lujan Grisham has been a vocal supporter of Biden throughout his campaign, even making the shortlist of potential vice presidential picks. She also had the distinction of announcing her state's commitment to supporting Biden as the Democratic presidential candidate during the virtual roll call of the Democratic National Convention. Lujan Grisham has also been named to Biden's potential transition team.

But while the governor appears to be all in for Biden on the surface, his energy proposals seem to have her spooked and looking for a way to be exempt should new laws come to New Mexico.

Earlier this month, a study suggested that Biden's current stance on fracking, a position he has flip-flopped over and left supporters and critics scratching their heads, would be "devastating" for New Mexico.

Though the prospective Biden administration has been less than clear about their policies on fracking in general, they have been crystal clear that leasing of federal land or waters for the purpose of fracking or any production of natural energy would be strictly banned.

This is a huge problem for states like New Mexico, whose recent years of economic achievement have been due to investments in the future of energy in the state.

"An affordable and reliable energy supply is essential to a strong America and banning energy development on federal lands and in offshore waters not only threatens thousands of the best paying jobs but needlessly erases much needed revenue that helps pay for schools and other essential services,” Texas Oil and Gas Association President Todd Staples told the Carlsbad Current-Argus.

“American oil and natural gas is safe, clean and abundant, and misguided policies will only stifle our nation’s energy progress," Staples continued.

The American Petroleum Institute estimated that the banning of new federal leases for energy production in New Mexico would lead to the loss of approximately 22,000 jobs in the state, a $1.1 billion loss in state revenue, and the reduction of oil and gas production by nearly 50 percent.

"Banning federal leasing and development on federal lands and waters would derail decades of U.S. energy progress and return us to the days of relying on foreign energy sources hostile to American interests," said API director Mike Sommers.

A spokesperson for Lujan Grisham said the governor has not officially committed to seeking a waiver from the Biden-Harris policy vows.

"I would say it's premature to be indicating anything about waivers for federal policies that don't exist yet," said spokesperson Nora Meyers Sackett. "If we are fortunate enough to have a President Biden, the governor knows that will require a close working relationship to both protect our environment and rebuild our state's economy, and we look forward to those discussions and that work.

But Lujan Grisham has already faced tremendous pressure from residents and officials in New Mexico who see only disaster if Biden is voted across the finish line in November.

"No doubt Biden’s energy plans would spell disaster for our state and that’s why it’s critical for New Mexicans to know where their leaders stand,” said Western States Director of Power the Future Larry Behrens.

“Biden has spent the last weeks tripping over his position on fracking, so it’s no surprise some New Mexico leaders would rather stay silent. However, thousands of energy jobs and billions of dollars are at stake and we deserve answers."