Cruz: "Our Friends No Longer Trust Us and Our Enemies No Longer Fear Us" 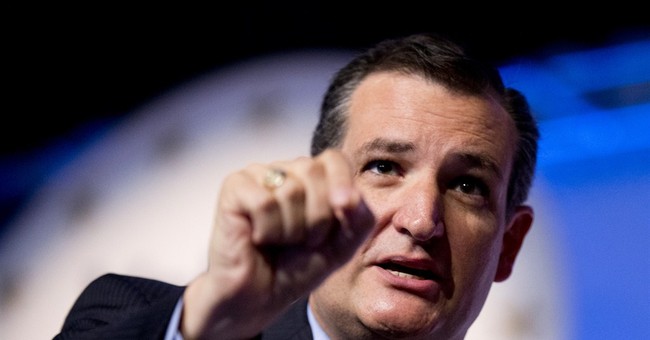 Among other things, he discussed the Anglo-American “special relationship,” ways both countries can work together to combat Islamic terrorism, and the numerous foreign policy blunders committed by the current administration.

“We’re gathered here today to talk about one of the greatest resources that America’s traditionally enjoyed, which is the power of friendships across the globe,” he began.

“One of the sad legacies we’ve seen over the last six years is the fraying of friendships and alliances across the world,” he continued. “Today, the consequences of the Obama/Clinton foreign policy is that our friends no longer trust us and our enemies no longer fear us. That is profoundly dangerous for America and is profoundly dangerous for the world.”

However, he also noted that alliances, not unlike relationships, can change over time. For example, he addressed the strange fact of history that Great Britain was America’s “first major enemy.”

“The ties of language and culture and values that stretch across the Atlantic proved far stronger than the unpleasantness that took place between 1775 and 1850,” he said. “Perhaps our strongest bond is a shared commitment to the democratic principles that have survived since antiquity.”

“Our friendship is so profound today that the very notion that we were once sworn enemies seems so strange as to be laughable,” he declared. “Indeed, we have weathered some of the darkest hours together: fighting in the 20th century through the trenches of two world wars as well as side-by-side winning the Cold War.”

And yet, he added, the world is not necessarily safer or more stable, despite these strategic and geopolitical victories.

“Most recently, our countries have found ourselves fighting alongside again, this time [on the front-lines] of the war against radical Islamic terrorism,” he said. “In a stark demonstration of how strongly we’re allied, when ISIS began its vicious rampage of staged beheadings this summer, the first victim was an American -- James Foley -- and the second was Steven Sotloff, a dual Israeli-American citizen.”

“And the third,” he added, “was British.” He later informed the audience his name was "David Haines."

“For them, all representatives of free and tolerant societies are equally abhorrent,” he continued, “a fact that makes today a critical opportunity to reaffirm our commitment to our shared interests and values as we continue partnering with the UK in the fight against this vicious enemy.”

Changing subjects, he also spoke at length about the president’s misguided approach to handling two inflexible enemies: Russia and Iran. For instance, he was particularly incensed that the president was caught red handed in 2012 telling a Russian “henchman” he would have “greater flexibly” to make concessions to his boss after he won a second term.

Furthermore, he addressed the looming and game-changing historical failure on the horizon if and when Iran obtains nuclear weapons.

Naturally, though, he had a solution to prevent such a dangerous outcome: Get tough.

“We should declare the nuclear negotiations a failure,” he said emphatically. “With Iran, we need more stick and a whole lot less carrot.”

“My advice is: Pick your allies wisely. Support and reassure them. And then insist that they fulfill their promises and commit their resources,” he concluded. “Then as now, we should heed the words of Lady Thatcher. We should embrace peace through strength. We should stand by our friends. And we should defend the values of the United States of America.”