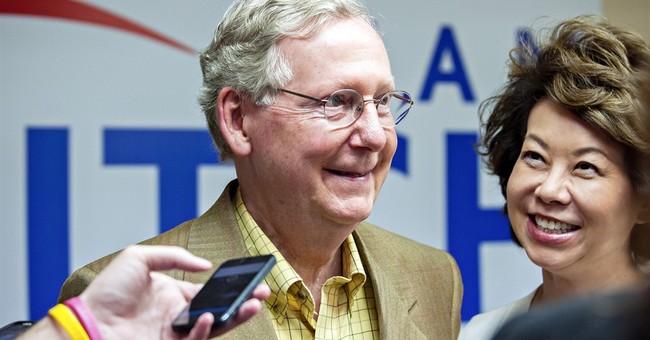 But for our purposes, let us just examine the GOP Senate races being held tonight in the latter three.

Kentucky: Despite garnering national attention upon first launching his campaign, Tea Party candidate Matt Bevin’s hopes of unseating incumbent Sen. Mitch McConnell this evening look increasingly desperate. A recent Bluegrass poll shows Sen. McConnell leading by some 20 percentage points. Most political observers therefore acknowledge that McConnell will easily secure his party’s nomination yet again. But the campaign to keep his seat is only just beginning. Indeed, McConnell trails the Democrats' hand-selected candidate, Alison Lundergam Grimes, by a percentage point (according to that same Bluegrass poll linked above). Other polls confirm the race is a dead heat, too. So even if the Senate Minority Leader staves off a primary challenger tonight, he still has his work cut out for him.

Oregon: This is a race we’ve been following for some time. The establishment, pro-choice candidate, Dr. Monica Wehby, has been endorsed by Republican celebrity also-rans such as Mitt Romney and Newt Gingrich. She’s also launched a series of successful campaign ads that seem to have really put her on the map. Her Republican Tea Party opponent Jason Conger, however, is hoping to capture the nomination tonight. But two separate polls show Wehby with a commanding, double-digit lead. Worse, another poll from earlier this month shows Wehby edging the incumbent Sen. Jeff Merkley (D-OR) by four percentage points (45/41), with leaners.

Clearly, the establishment feels Wehby is the most electable candidate, despite some unflattering stories that have recently come out about her.

Georgia: This will be the most closely watched race of the evening. Seven candidates are hoping to succeed retiring incumbent Sen. Saxby Chambliss as Georgia’s next U.S. Senator. But only two will presumably advance to the next round. To wit, a candidate must exceed 50 percent of the vote to capture the nomination outright. And since there are tons of candidates vying for a nod, that’s unlikely to happen. Therefore, the top two finishers are expected to compete in a primary run-off on July 22.

Who might those top two finishers be? At this stage polls indicate there are only three candidates who have a serious shot at the nomination. They are businessman and political novice David Perdue, Congressman Jack Kingston, and former Secretary of State Karen Handel. The latter candidate is probably most ideologically aligned with Tea Party conservatism; she was endorsed by Sarah Palin and Red State's Erick Erickson. Nevertheless, a recent Morris News Service/Fox5 poll shows that the race is very much up for grabs. Perdue currently leads his rivals with 27 percent of the vote but Kingston and Handel are essentially tied in second place at 17 percent. (Nearly one-fifth of Republican primary voters in the state are also undecided). So if Handel finishes in the top two tonight, she could give the Tea Party a real fighting chance at the nomination and another primary victory. The winner is expected to take on Democrat Michelle Nunn in the general election.

Be sure to stay tuned for our post-election analysis tonight after the results come in. Finally, another campaign season is fully underway.